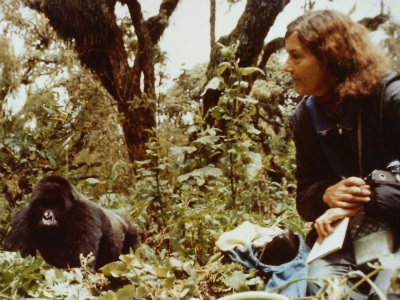 December 26 will mark the 30th anniversary of Dian Fossey’s death. While Fossey garnered mainly respect and admiration for her dedicated work in mountain gorilla conservation, she also encountered many adversaries—and her 1985 murder in her cabin in Rwanda remains a mystery to this day.

The anniversary of Dian Fossey’s death remains a somber one for our organization, but we choose to use this time to reflect on some of the unforeseen, wonderful accomplishments that have occurred during the last 30 years—many of which we’re not sure Dian Fossey would have expected.

Perhaps the aspect of Fossey’s legacy she would be the most proud of is the increase in number of mountain gorillas. During the 1970s, there were an estimated 250 mountain gorillas left in the Virunga mountains, and Fossey was not confident this species would see the 21st century.

“If Dian Fossey were still alive, she would be in first line to advocate and to talk to the world to save such endangered species. I feel we now have the responsibility to take this role,” says Fossey Fund Public Relations and Gorilla Program Manager Veronica Vecellio.

Currently, the population sits at 480 individuals in the Virungas (with 880 total worldwide), with the mountain gorillas being the only great ape species to have a population increase in recent decades. The new census, being conducted in 2015-2016, will reveal a new estimated total, and we are hopeful that this count will reveal further population increase.

Francois Bigirimana, a park guide at Volcanoes National Park who worked with Dian Fossey, says that he believes Fossey would be proud and recalls the most impressive part of working with the conservationist was her personal dedication to lead by example: “She was so courageous because she was doing what even rangers and local authorities were not doing!”

2. Her work has been continued under Rwandan leadership:

All but two of our 120 staff in Rwanda are Rwandans, including the director of the Karisoke Research Center. Felix Ndagijimana became the director of Karisoke on Jan. 16, 2012,—on what would have been Dian Fossey’s 80th birthday—after first joining the Fossey Fund in 2004. As director, Ndagijimana oversees all of Karisoke’s day-to-day activities, which includes daily protection of half of Rwanda’s mountain gorillas, scientific research, training scientists and engaging local communities. He also works closely with the Rwandan government, as well as with our other conservation partners.

“I think that Dian Fossey would be surprised to see how the research center she started with only a few Rwandan staff is now a world famous research institution with more than 100 staff members,” Ndagijimana says. “She would also be very proud of how the work she started (habituation, monitoring and protection of gorillas) is in larger part responsible for the population increase that we see today.”

Like Ndagijimana, many of our staff have grown into their careers at the Fossey Fund. For example, Biodiversity Research and Program Manager Deogratias Tuyisingize and Research Assistant Samedi Mucyo, first worked with the Fossey Fund as undergraduate students and were hired upon finishing their degrees.

Dian Fossey pioneered mountain gorilla research, with discoveries about social relationships, individual personalities, reproductive strategies, vocalizations and noseprints. With the recent population growth and new, never-before-witnessed situations that reflect a dynamic population with limited habitat, scientists today are discovering how much more we still have to learn.

“Some people may ask, ‘We’ve being doing this for 50 years, what is there still to learn?’ But we have seen so many changes in last five to seven years. It really highlights how flexible gorillas can be and also why long-term data collection is so important,” says Research Manager Winnie Eckardt, Ph.D.

With our long-term database, the Fossey Fund has become a flagship organization for gorilla conservation and science. Indeed, most of what is known about gorillas today comes from it. Recent studies by staff, such as the effect of stress on gorillas and the role of paternity in male/infant relationships, reveal more about gorillas than we could have hoped 30 years ago.

Just as Dian Fossey was a pioneer for mountain gorilla conservation, the Fossey Fund is conducting pioneering work to save Grauer’s gorillas. Since 2000, we have been working in Democratic Republic of Congo, the only country where Grauer’s gorillas are found. It is estimated that the Grauer’s gorilla population has decreased by as much as 50% in the last decade, and hunting, mining and logging are all threats these gorillas face.

The Fossey Fund now runs a full time field site, called Nkuba-Biruwe, which provides 365 day-a-year gorilla protection, just as we do at Karisoke. We are also working with the national park authorities to study Grauer’s gorillas at Kahuzi-Biega National Park.

Chief Park Warden of Volcanoes National Park, Prosper Uwingeli, says he thinks Fossey would be encouraged to see the three governments of Rwanda, Congo and Uganda supporting gorilla conservation and forging mechanisms to work together. “We are still fighting poaching, with perhaps a better environment of collaboration and joint efforts, but that reminds us every day the difficult work she was doing 30, 40 years ago—ultimately on her own,” he says.

While our organization has evolved and experienced many achievements in the last 30 years, we pay homage to Dian Fossey this month and vow to continue her mission. “As we look back on the 30 years since Dian Fossey’s death, we celebrate her courage and perseverance and the difference one person can make. Dian devoted her life to saving gorillas, and we are honored to carry on this important work, never losing or forgetting her pioneering spirit,” says President and CEO Dr. Tara Stoinski.