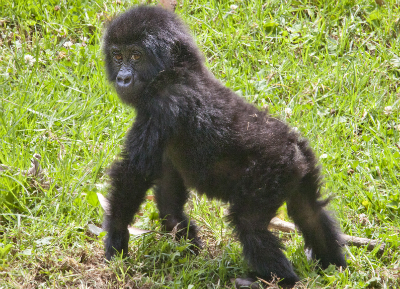 One month ago, where the Virunga mountain range straddles the border of the Democratic Republic of Congo (DRC) and Rwanda, a sickly and traumatized little orphaned gorilla named Ihirwe was given her name. Meaning “luck” in the local Kinyarwanda language, Ihirwe certainly deserves such a name. Indeed, the tiny endangered animal was lucky that her captors were caught and imprisoned for poaching. . . Lucky that the Mountain Gorilla Veterinary Project (MGVP) and the Dian Fossey Gorilla Fund International were notified. . . Lucky that she was rescued by MGVP’s Dr. Jan Ramer, an exceptional and loving wildlife veterinarian. . . Lucky to be in a safe facility in Kinigi, operated by MGVP and the Fossey Fund, where she can recuperate from her ordeal and, with the help of experienced caregivers, begin to blossom into a confident, healthy young gorilla.

Ihirwe’s rehabilitation facility is located at the base of the Virunga Mountains. Mount Sabyinyo’s craggy summit rises impressively above at 12,000 feet, a perpetual reminder of her species’ natural habitat; where Ihirwe should still be, if as suspected, she is a mountain gorilla. The tiny survivor’s temporary residence is safely enclosed by a tall brick wall which encloses a large lawn, equipped with wooden climbing structures and a night house.

Ihirwe is never alone and is accompanied by one of her three caregivers at all hours of the day and night. She spends sunny afternoons out in the grassy play area where she teeters around on two legs while raising her little arms up towards her human caregiver. The caregiver casually picks her up and swings her around for the hundredth time this afternoon.

Dr. Jean Bosco Noheli of MGVP visits Ihirwe periodically to assess her medical condition and monitor her development. She is growing stronger and more confident by the day. MGVP and the Fossey Fund are excited that they will soon be able to integrate her with other youngsters of her kind in a larger, more natural setting as soon as she is ready and her subspecies is determined. 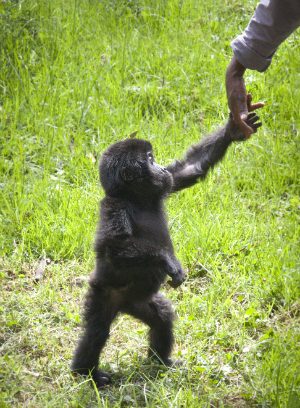 The little orphan, just barely over a year old, was poached on August 2nd near the Bukima area of Virunga National Park, in the DRC. When the Congolese poachers, assisted by two Rwandan men, attempted to cross over the border to Rwanda, they were arrested and subsequently incarcerated in the Giseny jailhouse. They claimed that they did not poach the orphan themselves, but instead purchased her from an unnamed source for $15,000 USD. The poachers were still in possession of the frightened youngster at the time of their incarceration and she was placed in the jail cell along with her captors. Reportedly, she was tensely curled up into a protective ball on the bed, desperately awaiting her rescue.

Ihirwe’s recovery was quickly facilitated by the MGVP, the Rwandan Development Board (RDB), the Congolese park authority (ICCN) and the Fossey Fund on August 7th, 2011. A rescue team led by MGVP’s Regional Veterinary Manager Dr. Jan Ramer hurried to the jailhouse to rescue the little orphan late Sunday evening. Immediately, it was clear that she was suffering from some upper respiratory distress, likely a product of exposure to a human captor’s illness. However, with medical treatment and her nutritional and psychological needs met, she is now healthy and will soon be ready to travel to a new home.

Ihirwe’s one-month quarantine period is completed, but the Fossey Fund and MGVP are waiting for one final piece of information before her big move. The results of her DNA analysis will determine whether she is indeed a mountain gorilla or a Grauer’s gorilla. This will determine her future residence. Grauer’s gorillas are another endangered but more numerous subspecies of eastern gorilla, whose habitat is a lowland forest to the west of the Virungas. Adult mountain gorillas are darker and have longer hair than the Grauer’s gorillas, but it is difficult to tell the infants of the two subspecies apart.

If a mountain gorilla, Ihirwe would join four other recent graduates from the Kingi facility in the Senkwekwe center, in a more natural, rural setting in Rumangabo, DRC that ICCN developed for confiscated mountain gorillas. The other option would be the Gorilla Rehabilitation and Conservation Education (GRACE) center for Grauer’s gorillas, in the DRC.

Ihirwe’s samples were sent to the Max Planck Institute in Germany. Max Planck has been the primary laboratory used to analyze the DNA of Rwandan gorillas over the years. Dr. Ramer hopes that, given their extensive database of information, they may also be able to determine Ihirwe’s natal group, a fascinating possibility for the gorilla conservation community.

Jean De Dieu Ngilira, head caretaker at the Kinigi orphan facility, says that he is pleased with Ihirwe’s progress. She has a great appetite and enjoys eating lots of bananas, carrots and pineapple. They are also supplementing the infant’s food with milk and wild celery. It is important to the MGVP and the Fossey Fund that she be exposed to various food sources from her native habitat. Although Ihirwe has attempted to strip the celery stalks to access the nutritious inner core, she has not yet mastered the technique and still depends on her caregiver’s deft fingers.

Ngilira says that it took several weeks for the orphan to gain enough confidence and comfort in her new surroundings to start playing. Even then, she would separate only a short distance from her caregivers before running back to the safety of their touch. Ngilira was proud to report that this past week has been a big period of growth for the youngster. She began to entertain herself, and started climbing the small trees in her enclosure and playing apart from her caregiver for extended periods of time. This excellent development suggests that she will soon be ready for her move to Senkwekwe or GRACE. It is hoped that the gorillas in each facility will form their own living group to prepare them for eventual release in the wild to live out their days in their natural habitat with others of their species.

It happens all too frequently that wildlife poachers rob an infant gorilla of her chance at a natural life in the wild. At night, little Ihirwe should be snuggled up next to her mother’s warm body in their shared night nest. By day, she should be playing with other gorilla youngsters, safely exploring her surroundings, traveling and foraging with her natal group, peacefully secluded in her life in the forest. Ihirwe’s mother, along with various other members of her group, likely died in their attempt to protect the infant from the poachers.

The Fossey Fund and Karisoke Research Center’s anti-poaching patrols continue to work hard to prevent these tragedies from happening. Having our patrols in the field seven days a week, dismantling snares and monitoring for illegal activity is apart of our “active conservation” initiative; an innovative approach that was created by Dr. Dian Fossey in early 1978 as a response to her beloved silverback Digit’s death.
For more information on the Fossey Fund’s anti-poaching patrols and to make a donation to the Fund’s anti-poaching effort, go to www.gorillafund.org.