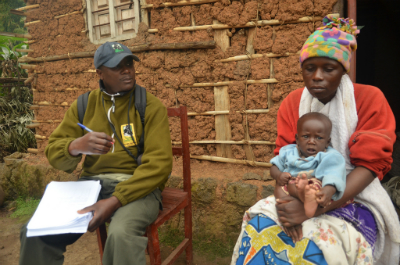 Early one September morning, Ildephonse Munyarugero, the Dian Fossey Gorilla Fund’s Ecosystem Health and Community Development Program manager, joins Fossey Fund field staff in the back of their Land Cruiser to head up to Bisate Village, where the trackers’ house is located and also where many of our trackers and their families live. It is the starting point for many of the staff’s daily excursions into Volcanoes National Park to monitor and collect data on mountain gorillas. But Munyarugero has planned a different kind of excursion today. Instead of heading to the trackers’ house, he stops at the Bisate Health Center just down the road.
For 10 years, the Fossey Fund has been working in partnership with the health center to execute an annual de-worming campaign in Bisate and surrounding villages. The Fossey Fund began the program to combat one of the threats to mountain gorillas — human disease. Gorillas can easily contract the same diseases as humans, and with so few gorillas remaining in the relatively small area of the Virunga massif, disease has the potential to devastate the world’s population of mountain gorillas. But one of the challenges the human population living near the park faces is lack of access to safe drinking water, which leads to high rates of intestinal parasite infection in their communities.

“This health program was initiated to enhance the protection efforts that already existed,” Munyarugero explains. “It had — and still has — a focus on intestinal parasites because it has been proven that some intestinal parasites can be transmitted from humans to mountain gorillas.”

Each year, the de-worming exercise has tested 1,000 people in communities around the park and provided targeted treatment for both relatively simple intestinal parasites, such as pinworms, to more complicated parasites, including amoebas. An additional 10,000 people receive treatment for simple, common parasites as a precautionary measure. This year’s de-worming exercise will target only 500 people for testing — in the villages closest to the park boundary — but Munyarugero hopes to develop a more detailed understanding of the parasite prevalence in these areas that are at highest risk for transmission into the park.

Working with the community

The de-worming exercise is preceded by a community sensitization program carried out by local “health animators,” who serve as liaisons between communities and government and non-governmental organizations and monitor and report on health issues. They address the importance of testing and treating for intestinal parasites. The health animators also help coordinate the distribution of materials for sample collection and help collect the samples from community members. However, this year, the Bisate Health Center is receiving samples at a slower pace than they would like, which is what brings Munyarugero to Bisate today. He plans to visit a nearby village to talk to the community about the project, answer any questions they have, and try to solicit their participation. 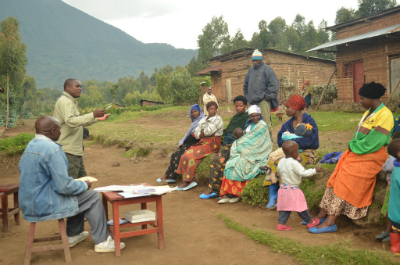 At the Bisate Health Center, he collects sampling jars, tape for labeling them, and questionnaires for each participating family, and then begins a hike up into the hills near Volcanoes National Park. At the village of Nyarusizi, a group of families are already gathered with a community health animator who is providing health checks for the children. It is the perfect opportunity for Munyarugero to talk to the community about the de-worming project.

The group Munyarugero addresses is mostly women and children, and he garners a great deal of participation following his talk. He is soon adding names to the list of participants and handing out the sampling jars. Munyarugero says that the de-worming exercise is usually welcomed by the women in the communities, who are often the children’s primary caregivers. Although the deworming program tends to receive more participation from women than from men, it has an established, positive reputation that usually attracts participation from many people who are happy to take advantage of the services offered.

Next, Munyarugero travels from house to house interviewing families about factors that may contribute to parasite infestation, including household sanitation facilities, water sources, and agricultural practices. One of the main frustrations community members seem to have is that year after year, individuals still test positive for intestinal parasites. The primary reason for infestation and re-infestation following treatment is probably poor water sanitation and hygiene in the area. This is another issue that the Ecosystem Health and Community Development Program aims to address.

Munyarugero hopes that in the future, the program will have greater success in preventing parasite infestation by promoting clean water supplies and better hygiene and sanitation practices, rather than just treating the medical problems associated with these systemic challenges. He emphasizes three crucial elements to reducing parasite prevalence in the communities around Volcanoes National Park: more clean water supplies, adequate sanitation, and education. 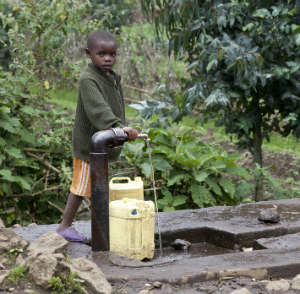 Already, the program has made some strides forward. “In 2006, from the previous de-worming exercises, we realized that there was really a shortage of safe drinking water in villages adjacent to the national park. That was identified as the major cause of the parasites, so the Fossey Fund looked at the potential that was in the area,” Munyarugero says. “That’s why we renovated and expanded the very few water sources that were already there… We renovated the water tanks; we constructed new ones; we installed rainwater tanks; we renovated the water pipeline; and we did a lot to supply safe drinking water to the communities in the Bisate area…. Even today, we are keeping an eye on the water infrastructures installed there.”

But despite these achievements, there are still several challenges to combating intestinal parasites in the communities, including difficulty in maintaining the cleanliness of the water once it is obtained from the water source; maintaining the condition of the water sources; and building appropriate latrines, given the characteristics of the volcanic rock soil where these communities reside. The work done by the Ecosystem Health and Community Development Program and through a new partnership with Emory University’s Rollins School of Public Health, provides important guidance for tailoring our activities to help decrease the prevalence of intestinal parasites in communities around Volcanoes National Park.

In the meantime, after spending most of the day in the village promoting the de-worming project and distributing materials, Munyarugero returns to the Bisate Health Center to meet with the lab technicians there. As he consults with them, a woman from Nyarusizi Village arrives at the Health Center, presumably to submit her family’s samples. We hope that over the next couple of weeks the Bisate Health Center will receive all the samples expected, and will be able to provide assessment and treatment to the families who participated in the de-worming exercise this year.