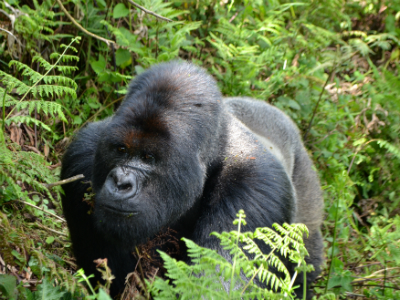 It seems that age isn’t discouraging solitary mountain gorilla silverback Inshuti in trying to get females and start a group of his own. He has tried countless times over the years without success, and Fossey Fund trackers and researchers continue to observe his efforts.

Inshuti became solitary in 2003 at the age of 15, when he left Shinda’s group. Now he is 27 years old and known to Fossey Fund field staff for his persistence and intolerance of humans. He also has made amazingly fast recoveries from severe injuries, the result of the many interactions he has initiated with neighboring groups while trying to gain females.

Inshuti’s best year was 2007, when after several unsuccessful attempts, he managed to form his own group, which gradually grew to include nine gorillas. The group was stable for some years until an adverse sequence of events started 2012. Inshuti became solitary again, when his last female left at the beginning of 2014.

In October 2014 another chance arose, when silverback Bwenge died, leaving a group of gorillas without the protection of an adult male. For unknown reasons, the remnants of the group, which at the time were led by elder female Maggie, didn’t join Inshuti, except for female Faida, and even she left him after just a few weeks, so he was alone once again.

Fossey Fund trackers saw Inshuti again in March 2015, when he was involved in an intense interaction with Titus’ group, which caused the infanticide of an infant in the group. The interaction ended with the group moving away and Inshuti left alone.

After few weeks of inactivity, in June 2015, a typical “Inshuti-like” interaction occurred with Gushimira’s group, one of the recently formed groups in the area monitored by the Fossey Fund. Inshuti followed the group for four days, approaching them very early each morning. Not even the frequent charges of dominant silverback Gushimira dissuaded him.

In the end, Gushimira finally succeeded in chasing Inshuti away. Fortunately there were no consequences or injuries, though Gushimira was visibly stressed and needed a well-deserved rest after the intense activity.

For now, Inshuti has again withdrawn into solitary life – at least until an opportunity arises for another chance to interact!