Since January of this year, 10 infant gorillas have been born into the mountain gorilla groups that we monitor from the Karisoke Research Center. Infant gorillas are very vulnerable during their earliest days, however, and at this time only six of the newborns are still alive.

Of the four deaths, three occurred in October, in an unhappy sequence, on Oct. 2, 7 and 19, but their deaths were unrelated though similar in some ways. 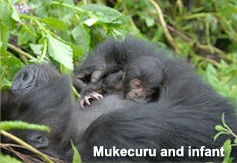 On Sept. 22, Mukecuru, from Pablo’s group, gave birth. The infant seemed to be fine and healthy in his first week of life. He was nursing and his mother was carrying him properly, showing good mothering experience. Suddenly, after a week, the infant gorilla began making strange vocalizations, which carried on for an entire day. The noise was not like a normal cry but more like a very loud pant. The baby then stopped nursing. The vocalizations attracted the attention of all 46 group members. They stopped their activities and surrounded Mukecuru, looking at the baby with curiosity. Mukecuru did not eat or move, visibly stressed about the infant’s problems.

On Sept. 30 and Oct. 1, Mukecuru and the infant could not be located, despite the extensive efforts of the Karisoke field trackers, including looking for them under all the bushes. During that period Pablo’s group was ranging in a high-altitude zone called Kimbagira on the slope of Karisimbi volcano. The area is particularly dense with thorny vegetation typical of the alpine zone.

Mukecuru was finally found on Oct. 2, but unfortunately the infant was dead. She carried it for five days, a method of trying to protect it from the curious approaches of other group members. When she finally let it go, trackers could not locate the corpse, so a necropsy was not possible.

Mukecuru did not develop a swollen breast following the sudden end of lactation, which led us to assume a problem with milk production as a possible cause of death.

Mukecuru is an old female, estimated to be 29-30 years old. She was first seen in Pablo’s group in 1995, as she transferred from Susa’s group. She has three living offspring, two of whom are still with her in Pablo’s group. The other one emigrated in 2007. Mukecuru lost her fourth infant at the end of 2007, a day after its birth, and that case had some similarities to the current one. 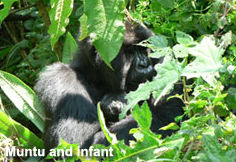 On Oct. 7, an infant died in Isabukuru’s group. This infant was born on July 9 to 17-year-old mother Muntu and the exact cause of death is unknown. The infant seemed to be in good health, nursing from the mother and moving normally, but on the morning of Oct. 7, he was found dead and Muntu was carrying the body. She was stressed, and, together with the dominant silverback Isabukuru, aggressively charged trackers, trying to avoid any human proximity. Some hairs from the baby were found in the night nest and along the trail. This evidence and the stressed behavior of the gorillas led us to suspect some kind of an aggression had taken place, although no signs of intergroup interactions were found around the group and no wounds were observed in any gorillas including the dead infant. Again, the mystery couldn’t be solved since trackers were unable to locate the body of the infant after Muntu eventually let it go.

On Oct. 19, 17-year-old female Nyabitondore from Pablo’s group gave birth, only 10 months after her transfer from Susa’s group. Her infant was found dead the same morning and it is unclear whether he was stillborn or died a few hours after birth. The infant’s dimensions were normal and no external sign of illness or trauma were observed. Once again, the mother carried the infant for some time and the body couldn’t be recovered for necropsy.