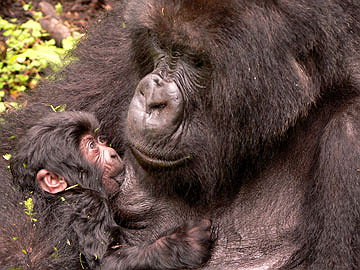 It was 10:35 a.m. when the trackers of Beetsme's group, one of the three mountain gorilla groups we monitor from the Karisoke Research Center, observed the first signs of uneasiness by female Mawingu. She started collecting leaves from lobelia plants, which are not a type eaten by gorillas. As she moved around, she was followed by second-ranking silverback Kuryama but kept moving away from him and avoiding his attentions.

After this, Mawingu went into a bush and trackers thought that she was resting, until they saw her come back out, holding an infant in her hands! It is believed that the birth must have been directly witnessed by other gorillas, especially Kuryama, who was placed close to the bush during the process. 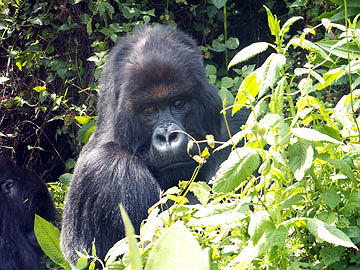 A few minutes after Mawingu emerged, some of the other group members approached her to observe the newborn, especially some of the other youngsters in the group. Dominant silverback Titus also arrived, though a bit later, and began to protect Mawingu. Other silverbacks were seen to be observing from a distance of about five meters away. When the third-ranking silverback Bwenge approached Mawingu and the new infant, Kuryama attacked him, which triggered a series of aggressive actions among a number of the adults (both males and females).

After these aggressions, Mawingu started moving, followed by most of the group members, including Titus, who continued to remain protective. Kuryama was seen to exhibit some aggressive behavior toward Mawingu at this point, but no females were aggressive toward her. Mawingu was also observed eating the placenta.

This report was prepared by Felix Ndagijimana, Research Assistant at the Karisoke Research Center.