The Fossey Fund’s Karisoke Research Center gorilla trackers are always pleasantly surprised when a female gives birth, because gorillas show no outward signs of pregnancy – the newborns are small and big bellies are the rule (gorillas have long intestines to digest the large amounts of fibrous vegetation they eat). The trackers usually discover the newborns with the mother when they arrive at the group in the morning. That’s one reason why Imvune’s birth in mid-March was a unique event, because the trackers were able to witness it. The other reason is that it was the first birth in Titus’s group since Titus’s son Rano took over as dominant silverback following a dramatic challenge that ended in the elder male’s death.

When the trackers reached the group at 8 a.m. on March 15 they found that Imvune and the other gorillas were doing well and weren’t exhibiting any unusual behavior. However, that changed an hour and a half later when Imvune started making one resting spot after another out of the vegetation on the forest floor, apparently in an effort to be comfortable.

The other gorillas of her group, who were more than six meters away, approached her with Rano leading the way and kept following her, even checking and smelling the rest areas she was working on. After making four different areas, Imvune moved quickly to a distance of five meters. All the gorillas followed her. The second-ranking silverback of her group prevented trackers from getting closer at this point. Then, the other gorillas surrounded Imvune in a circle for almost one minute. 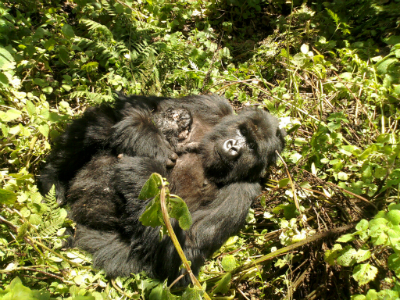 “When all the gorillas moved away a bit from the circle, we observed traces of blood where Imvune had been,” says Research Assistant Jean Paul Hirwa. “We were concerned about a possible illness, and tried to keep an eye on her. At 9:28, we saw that she was holding an infant!”

She cut the umbilical cord with her teeth and then ate the placenta-like substances. The infant cried briefly twice after the delivery. Imvune started cleaning and grooming her infant using her mouth and all of the group members were curious. They all passed in front of the mother and infant to watch. Rano remained close to her and displayed to the other adult males, trying to chase them away – to no avail.

Then, Imvune started moving around and around, building many resting sites and then leaving them, seemingly looking for a safe place, but all the group members continued to follow her. This continued even when the group settled down for their usual resting period. Imvune was surrounded by every gorilla in the group.

The new mother was doing well when the trackers left for the night. They said the infant seemed well too, although they did not observe it suckling. Imvune was very protective of her infant, staying as close as possible to the silverbacks (especially Rano and Pato). “All the group members, including even our trackers, were interested in seeing the new infant, after a long time without a birth in that group” says Hirwa.

The historic silverback Titus had led one of the three large gorilla groups monitored by Karisoke for several years until they began splitting up about five years ago. Titus first survived a series of challenges from his son Kuryama, who finally left the group with four females in 2007-8. By 2009 Titus’s group was reduced to three blackbacks, elderly female Tuck, and two juveniles. Titus’s son Umushikirano (Rano), who had not been seen since mid-2007, suddenly returned in 2009. Titus moved away to avoid Rano's challenges, but Rano pursued him and the group until the ailing Titus died after a few weeks. Tuck died the following year. Karisoke researchers wondered whether Rano had inherited his father’s gift for leadership and fatherhood (Titus had sired more offspring than any other silverback studied by Karisoke). Rano attracted two new females, including Imvune, but no offspring had resulted until now. The future of his group looks brighter today.