This morning Fossey Fund trackers observed an atypical interaction between Bwenge’s group and Giraneza’s group. It lasted a couple of hours during which the gorillas of both groups were apparently calm ignoring the other’s presence. 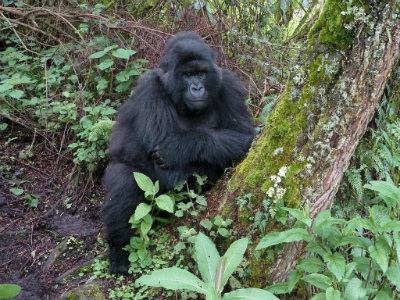 The interaction started when silverback Giraneza approached Bwenge’s group at 11 a.m. The silverback stopped about 50 meters away from Bwenge, who looked at him without any kind of antagonistic reaction.
The two groups stayed nearby (but never too close) eating calmly in the same area. Bwenge was the first one to move away at 1 p.m., while Giraneza stayed in the same area but then after a few minutes moved in the opposite direction. Female Nyandwi from Giraneza’s group tried twice to move toward Bwenge but she was stopped both times by Giraneza standing in front of her.
We were surprised to notice the lack of reaction by all gorillas, considering that the two groups interacted intensely just a few week ago. Today’s actions are evidence of how social interactions vary according to different contexts and unknown factors.
Giraneza’s group includes 3 gorillas (1 silverback 2 females and 1 infant) and Bwenge’s group has 9 gorillas (1 silverback, 3 females, 3 juveniles and 2 infants).
Veronica