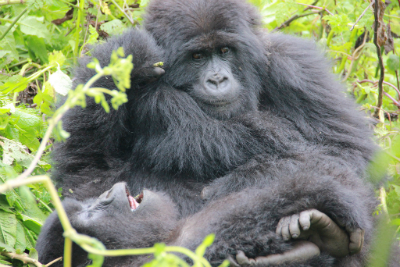 The Dian Fossey Gorilla Fund’s trackers and researchers recently observed a very interesting interaction between Ntambara’s and Ugenda’s groups, two mountain gorilla groups that are regularly monitored by our staff. The two groups met on the slope of Mt. Visoke on July 11, and while the silverbacks were busy displaying at each other with various aggressive moves, the youngsters were actually playing and having a “good time.”

Early that morning, Ntambara’s group had quickly moved downhill, approaching Ugenda’s group. The two groups eventually met on the large trail that leads to the old Karisoke Research Center camp. That same path has been used for more than four decades — since the time when Dian Fossey and her staff were using it — and it is still one of the most-used paths in the forest.

After only a few minutes, surprisingly, the gorillas from both groups mixed together, but in different ways. We then observed the unusual occurrence of seemingly different “attitudes” among different age classes.

The three silverbacks (adult males) from Ntambara’s group started displaying, standing in strut stance posture (the typical “fight” stance of male gorillas), while the Ntambara group’s females were screaming at Inziza, the only adult female of Ugenda’s group. While the adults were busy in these antagonistic performances, though, youngsters Inkumbuza and Igisubizo from Ntambara’s group quickly joined the youngsters of Ugenda’s group in a friendly and joyful manner. It was particularly interesting as well to see blackback Inkumbuza playing with young female Iterambere and juvenile Igitangaza, from the other group.

Inkumbuza has an interesting background and used to move back and forth between groups when he was younger, so we wondered if he would do the same this time. Apparently, he still maintains a strong bond with the gorillas of Ugenda’s group, with whom he used to play years ago. Certainly the young gorillas enjoyed the short time spent together!

The familiarity between the two groups comes from the fact that Ntambara’s and Ugenda’s group both split from Shinda’s group after the death of dominant silverback Shinda in 2008. Despite the long time that has passed, clearly there still is a tangible bond among the gorillas of those groups.
The interaction lasted one hour, and at the end of it the two groups went calmly in different directions and all group members rejoined their respective groups.

Observing intergroup interactions is one of the priorities of the Fossey Fund’s long-term data collection done in the field. Details on who initiated the conflict, the associated behaviors and the distances traveled are among the data collected to help us understand the dynamics and factors behind such occurrences.To investigate these behaviors in greater detail, the Fossey Fund has recently helped to launch a new doctoral study in collaboration with the University of Western Australia. The project started in May 2014, with principal investigator Melanie Mirville, an Australian-American student supervised by Cyril Grueter, Ph.D., who is a former Fossey Fund doctoral researcher. The study will make use of our long-term database at Karisoke as well as direct observations on the behaviors of gorillas after interactions. The project will have important conservation implications, considering the fact that the frequency of intergroup interactions is expected to increase as the population size increases.