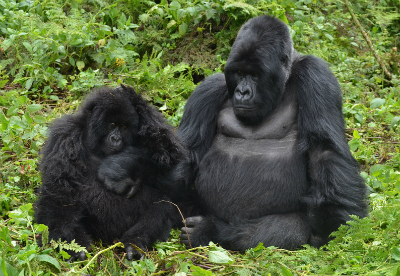 Kubaha, a 15-year old silverback in the Isabukuru group, has never had the best relationship with his fellow group members. Isabukuru, the group’s namesake dominant silverback, has a history of displaying aggressive behavior toward Kubaha, and the younger silverback is largely ignored by the group’s juveniles and infants. After Kubaha committed the infanticide of Bukima’s baby in July 2010, when Isabukuru was briefly absent from the group, the females in the group also began to shun Kubaha. But Kubaha’s poor relationship with the group is mostly evident in the distance he keeps from them, generally coming no closer than 50 to 100 kilometers away.

However, on April 24, trackers and research assistants witnessed an unusual interaction that might mean the other group members are changing their attitude toward Kubaha. He was observed resting not far from the other gorillas, and at one point he was no farther away than three meters from dominant silverback Isabukuru, who for a change did not show aggressive behavior to the group’s black sheep. While resting, Isabukuru and Kubaha began showing further signs of a good relationship by making belch-like vocalizations to one another.

After the group had finished resting and many of the gorillas had started feeding, juvenile Mushya and infant Sakara both approached Kubaha and initiated playing with him. After playing with the two young gorillas, Kubaha continued the friendly interaction by grooming them for over half an hour. This interaction between Kubaha and the two young gorillas took place in clear sight of Isabukuru and females in the group, but the other adults surprisingly showed no reaction. This might mean that Kubaha is on his way to being accepted fully into the group, though it is still too early to tell. We will continue to monitor this situation closely to see if in fact Kubaha will finally be in his group’s good graces.