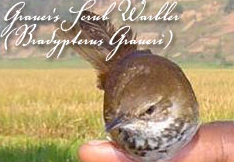 On Oct. 8, research staff from the Karisoke Research Center, a program of the Dian Fossey Gorilla Fund International, gathered with pupils and teachers from Nyabirehe Primary School to join the world to celebrate birds. The school is located close to Volcanoes National Park, Busogo Sector, Musanze District. Claudien Nsabagasani, a researcher at the Karisoke Research Center, led a bird watching expedition around the national park and pupils were given the opportunity to identify and observe birds in their habitats. He also spoke at the national event, along with Karisoke education officer Serge Joram Nsengimana, and distributed posters, stickers and postcards to the students, showing bird habitats and gorillas. 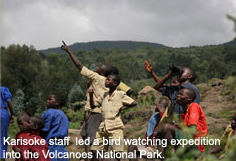 A total of 50 people participated in the event. Following the bird watching event, the students performed dances and sketches on the importance of bird conservation. The school has created a nature club (called Club pour la Protection de l’Environement de l’École de Nyabirehe), in order to sensitize people around the school about environmental issues. To date, the club includes 88 members.

Despite its small size (26,338 square kilometers), Rwanda has seven important bird areas (IBAs) covering 2,538 square kilometers (9.6% of the area of the country) and they contain 666 bird species. One of these IBAs is Volcanoes National Park, located in north-west Rwanda. The Volcanoes National Park is home to at least 124 bird species representing 41 families and including 15 bird species which are endemic to the Albertine Rift. Three of these endemic species are also listed as threatened by the World Conservation Union (IUCN): Bradypterus graueri, Cryptospza shelleyi and Falco naumani. Of course the park is also home to the Virunga mountain gorillas!