Despite heavy rain, April has been a lucky month for gorilla births. Three infants were born, one in each of three groups monitored by the Fossey Fund’s Karisoke™ Research Center: Bwenge’s group, Isabukuru’s group and Pablo’s group. A birth is always a special event for gorilla group members, as the group’s growth is a sign of success. Every birth is also celebrated by the people working for the protection of this endangered species, as population growth is an important confirmation of a successful conservation strategy. 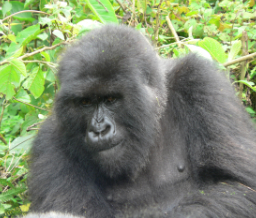 On the morning of April 18, young female Faida was holding a tiny new member of Bwenge’s group, which has grown to 11 gorillas. The newborn seemed to be particularly small, but this was not surprising, as the mother is also a small gorilla. Despite this vulnerable feature he was normally active and busy looking for his mother’s nipple to get his first meal.

Bwenge is the dominant and only silverback of the group, which has five females, each with an infant. The group formed in 2007 when Bwenge left his natal group, and gradually was joined by females from other groups. After the first year, the group passed through an unfortunate sequence of infant mortality, which saw six infants die for different reasons. Among these infants was Faida’s first offspring, who died in March 2009 as the victim of a fight between females, shown by the postmortem analysis which found evidence of a lethal bite of female size.

More recently, one after the other all females in the group gave birth, confirming the success of the group, which is led by a strong and capable silverback. 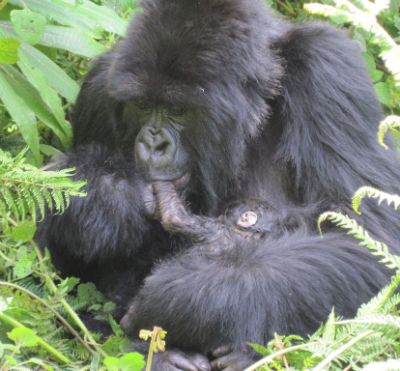 On April 26, Isabukuru’s group saw the birth of female Bukima’s infant. Bukima has lost three infants in her life, due to unrelated events. The first died from a birth defect; the second died a few months after the mother’s transfer to Isabukuru’s group; and the last one was the victim of infanticide by Kubaha, the second male in Isabukuru’s group. This tragic event occurred when the dominant silverback Isabukuru left the group to confront a lone silverback, leaving the females with Kubaha. This young male tried to escalate his own social position through the extreme though not unusual act of infanticide. This confirms that gorilla social dynamics vary depending on different personalities and scenarios.

A reassuring fact is that, according to our calculation of the gestation period (which is 8.5 months for a mountain gorilla female), the latest newborn was conceived just a few days after the infanticide.

The biggest surprise of the month came from Pablo’s group, with the unexpected birth of Gutangara’s infant on April 26. The interval between Gutangara’s two consecutive births was less than three years, which is a particularly short time for mountain gorillas. 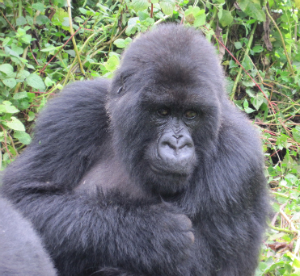 This pregnancy explains the recent dynamics observed between the mother and her 2-year-old daughter Shishikara. The infant went through a period of physical and emotional depression in November 2010 when Gutangara decided to prematurely wean her. Shishikara was following her mother and whimpering, but Gutangara did not allow her to approach the nipple, forcing the little gorilla to become independent. It was necessary for Gutangara to terminate lactation because her advanced stage of pregnancy required her to save energy. To reassure the little gorilla, all members of Gutangara’s family, as well as other females of the group, helped her to face the lack of her mother’s proximity and milk.

Pablo’s group is the largest group of mountain gorillas we have observed, now counting 47 members including the newborn. The presence of so many individuals of different sex and age classes allows many alliances to be extended to non-relatives. Infant care is made easier by the support of other females rather than depending exclusively on the mother. In the case of Shishikara, the old female Mukecuru was often seen close to her, as well as Shishikara’s sister Tamu.

The official celebration of gorilla births will take place in June, as it does every year, with the big event of the naming ceremony (Kwita Izina in Kinyarwanda) organized by the Rwandan Development Board, during which all gorillas born in the past year will be named. The big party takes place not far from Volcanoes National Park. All partners in conservation, including the Dian Fossey Gorilla Fund, as well as national and international guests and members of the local community will participate.

We have just received word that Izuru, a female in the Susa group, which is habituated for tourism, has also given birth! This means that as of today we have reached a total of 22 infants born in all the Virunga mountain gorilla groups, ready to be named at the Kwita Izina naming ceremony that will be held June 18.