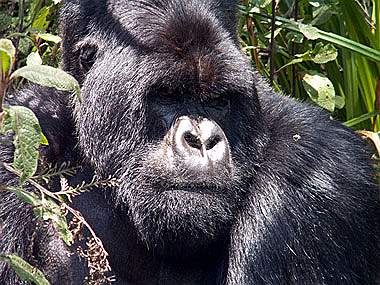 In gorilla news this month, Pablo's group of mountain gorillas (one of the three that we track regularly from the Karisoke Research Center) has been spending much of the time far into the forest on the eastern slopes of Mt. Karisimbi, requiring Karisoke trackers to camp at the edge of the park in order for them to be able to reach the group in good time. However, as the bamboo season is approaching, the group has moved back toward the park border and the bamboo zone, found at lower altitudes.

Those of you who are regular readers will remember the saga of the lone silverback, Muguri, who was following the group and interacting on several occasions during the middle of last year. Well, as Pablo's group has descended, they have been met with Muguri's attentions once more, with the lone male actually coming into the group, and being surrounded by the group's silverbacks and blackbacks who performed ritual displays until the intruder was intimidated enough to move on. Researchers are following this situation closely as Muguri's persistence in harassing the group could lead to more changes in behavior, as it did last year. 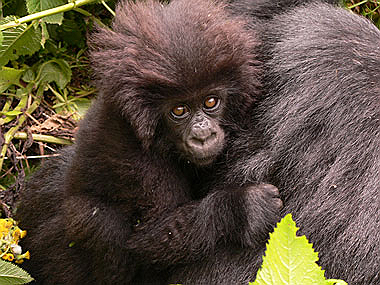 In Shinda's group, the newest addition to the family, Pasika's infant born last year, has began to explore his environment more, spending considerable amounts of time away from his mother, often in the protective company of his big sister, Umutuzo. This is perfectly normal for an infant of this age and is no reflection on his mothers' diligence and, being born on the fourth of July, we should expect a considerable amount of independence!

Education in the field

The education program at Karisoke this month has been gearing up for a busy year, expanding to cover more ground in both capacity building and sensitization of the local population. Plans have been put in place for the National University of Rwanda second-year students' “Introduction to Primate Conservation” field course in May, as well as discussions with other educational institutions to implement a modified version of this successful course. Educational visits to secondary schools in the region are also being planned, with materials being prepared and arrangements being made with the local education authority. The education program also continues to support seven final year NUR students in their dissertation studies in the PNV.

The Karisoke education program has also been pleased to assist one of our recent National University of Rwanda graduates in furthering his knowledge and career in conservation by organising a training course in ornithology with experts at Nyungwe National Park, Rwanda. Claudien Nsabagasani carried out his dissertation studies on the little known threatened bird — Grauer's rush warbler — under the supervision of Karisoke staff last year, graduating with distinction. We are sure that Claudien will make the most of this opportunity and will go on to become a leading light in bird conservation in Rwanda.