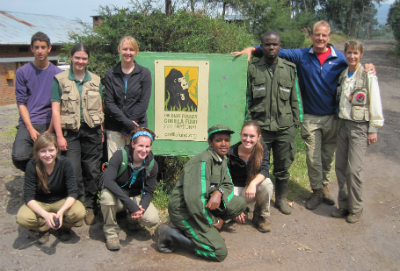 Dieter Steklis, Ph.D., former director of the Dian Fossey Gorilla Fund’s Karisoke Research Center, and his wife Netzin, also a primatologist, recently brought a group of eight students to observe mountain gorillas with Fossey Fund staff. The trip was part of the Primate Studies Field School, which the Steklises developed as a summer study abroad program through the University of Arizona. The students travel to several national parks in Rwanda, where they observe many different primate species before making a final stop at the Karisoke Research Center. Then, for four days, they hike up to see mountain gorillas in Volcanoes National Park, an experience that Netzin calls the “capstone” of the trip.

During their trip to Rwanda, the students see baboons, black and white colobus, vervets, blue monkeys, grey-cheeked mangabeys, golden monkeys and chimpanzees, among others. Before going to see the gorillas, they make an expedition to the original Karisoke site established by Dian Fossey in the park. There they visit her grave and the graves of the gorillas she studied. Dieter Steklis was the last Karisoke director to serve at the original location inside the park before the Research Center was re-established in the nearby city of Ruhengeri, so this is an especially meaningful pilgrimage for him to share with the students.

This year’s hike to the original Karisoke site was particularly special — it also happened to offer the students their first glimpse of mountain gorillas. As they hiked up the trail, silverback Ugenda and two blackbacks emerged from the vegetation to walk beside the group for a short time. The students were very moved by the experience. “They were so in shock,” Netzin said, as she described the students’ reaction to seeing gorillas for the first time. “I think half of them were in tears.”

After visiting the original Karisoke site, the students spent the next four days in the field with Dian Fossey Gorilla Fund staff, practicing taking note taking and making detailed observations of gorilla behavior. The Steklises say that the value of the experience in the park comes from the opportunity to not only observe gorillas in their natural habitat, but also to engage with the field staff and learn from their intimate knowledge of the individual gorillas they monitor. The field staff can often supply enlightening anecdotal or qualitative data that supplements the quantitative data the students are learning to collect.

“These guys have huge experience,” Netzin says. “You ask them things like, have you ever seen a male pick up a baby and take care of it for a while? Well, they’ve been around so long that ‘Oh yeah, there was one case…’ You know, those rare occasions — they remember.”

Each of the students is assigned one of four themes and makes notes and observations related to their specific line of inquiry. The four topics are parenting, social systems, cognitive ecology, and commensalism (the relationship between humans and wildlife). At the end of the month-long course, the Primate Studies Field School participants travel back to Kigali, where they present what they have learned about their assigned topics. 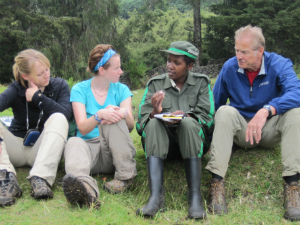 One of the reasons the Steklises choose Karisoke as a culminating field experience for the trip is the Fossey Fund’s incredibly long history studying a single population of primates. They hope that it will serve as an example of the depth of information that can be gleaned by long-term data collection and make clear the impact long-term research might have on our knowledge of other primate species as well.

“By adding that deep, historical dimension to the individual…I think it leads them [the students] to understand how unique this research program is here at Karisoke. It’s one of the few places where you have that depth, and the only way you can get it is by having people out there for 45 years,” said Dieter.

Karisoke Director Felix Ndagijimana added: “When we have visits like this one from the Primate Studies Field School, it also offers all of us at the Fossey Fund the opportunity to look at the gorillas with fresh eyes and to remember what it was like when we were observing and learning about gorillas for the first time. Of course we were excited to share what we know about gorillas with the students, but it was also an opportunity for us to learn from them.”