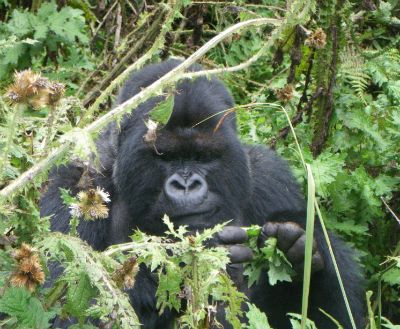 In August 2011, three male gorillas who had been members of Pablo’s group, the largest gorilla group the Dian Fossey Gorilla Fund International monitors (named after a legendary silverback), left the group together: Gushimira and Twihangane, two young 14-year-old silverbacks, and Irakoze, who at age 11 is a year shy of silverback status. The three males formed a bachelor group, which according to Gorilla Program Coordinator Veronica Vecellio “is a rare event and has been witnessed by Fossey Fund staff only one time prior to this.” Vecellio also notes that this bachelor group was especially unusual, as the three gorillas are not biologically related. “The only thing Gushimira, Irakoze and Twihangane had in common at the time was their age.”

However, shortly after the bachelor group formed the trackers were unable to locate their trail. In November 2011, Irakoze made a brief reappearance in Pablo’s group before disappearing yet again from both the group and the trackers’ sight. Despite the unusual nature of the non-familial bachelor group, considering that the three gorillas are at an adventurous age and had originally left on their own as a group, Fossey Fund staff assumed that they were still together and that the split occurred under normal circumstances. So when Gushimira was located on Feb. 20 this year for the first time since 2011, with a modest group of his own consisting of all three of the females from Ugenda’s group — Kanama, Inziza, and Kurudi — it was clear that the bachelor group was no longer together, which came as a great surprise.

On April 26, the mystery surrounding the disappearing bachelor group deepened, when trackers spotted Twihangane alone for the first time since he left with the bachelor group in late 2011. Twihangane was seen in an area that was once frequented by Pablo’s group and unusually near Musilikale’s group, a recent splinter from Pablo’s group, who were also lingering around their former group’s area. Twihangane, now 16, is the son of Mahane, the dominant female in Pablo’s group who recently transferred to Musilikale’s smaller subgroup. Twihangane’s mother’s presence in the Musilikale group might explain his proximity to them upon his return. 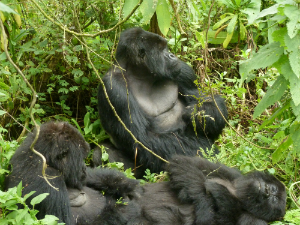 As the gorilla community in Volcanoes National Park is very close-knit, we are not surprised at Twihangane’s reappearance, but it suggests more questions than answers. It is unclear why the bachelor group broke up and why Twihangane is still alone and what his intentions are for revisiting the area where his former group ranges. Additionally, we are still wondering where Irakoze has been all this time.

Cantsbee, the oldest gorilla we now monitor, has been the dominant silverback in Pablo’s group for close to 19 years. In his old age, we have started to see other silverbacks in the group attempt to assert their dominance and take his place as top-ranking gorilla. According to Vecellio, “There have been occasions in the past where solo silverbacks have come into a group and attempted to establish dominance, particularly if the group was undergoing dominance shifts due to the old age or death of a dominant silverback.” Though Irakoze is still missing, we cannot exclude the possibility that he or Twihangane might reappear in Pablo’s group at the right time and attempt to take the dominant role, despite their long absences.