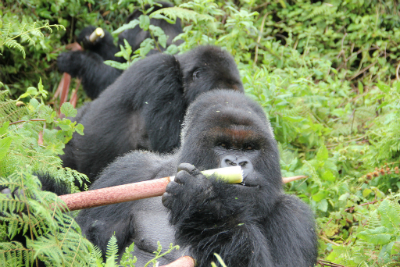 To learn more about this phenomenon and to ultimately gain a better understanding of gorillas, Deogratias Tuyisingize, Biodiversity Monitoring and Research Program coordinator for the Dian Fossey Gorilla Fund International, recently launched a study of bamboo phenology in Volcanoes National Park. Phenology is the scientific term used to describe the relationship between climatic conditions and biological occurrences.

The objective of the study is to assess and monitor the density and growth of bamboo throughout the park, and the correlation between bamboo and many natural conditions such as elevation, rainfall and temperature. In addition, the study aims to better understand the relationship between the bamboo seasons and gorilla ranging patterns.

The project, which officially began in March, is intended to be long-term. Data will be collected twice a year during the biannual bamboo seasons, which coincide with the high and low rainy seasons, for at least the next five years. During each bamboo season a three-month long period of assessment and data collection will take place in which more than 80 strategically located plots throughout the park will be surveyed every two weeks. Surveys of any given plot require Tuyisingize and a team of research assistants to count and record all the bamboo present, including the mature plants and the newly sprouted shoots, as well as any and all disturbances, changes and climatic variables. On these field visits, GPS devices are also being employed, recording specific locations, which will be combined with the observed data and entered into ARC GIS to create a comprehensive map of bamboo phenology throughout Volcanoes National Park.

Ultimately, the data collected by this study will provide a basis for a predictive model of gorilla presence and movement throughout the park. This information will be invaluable for everyone at the Fossey Fund. Veronica Vecellio, coordinator of the Fossey Fund’s gorilla program, expects the migration of gorillas to the bamboo zone during the bamboo seasons, based on her many years of experience working with gorillas, but she is excited about the answers the study can provide about these movement patterns. “The information the study will provide will be very valuable for understanding the variable of bamboo production and correlating bamboo production to gorillas leaving the park. For example, we will be able to know whether the gorillas are leaving the park more because of low bamboo shoot growth, or vice versa, if they are going out of the park less when there is a lot of bamboo growth.”

This bamboo season all but two of the groups the Fossey Fund tracks have been in the bamboo zone on a regular basis. As the zone covers just a small area of the park, when a lot of groups are present there is a lot of competition for space. According to Vecellio, the intense competition can act as a deterrent for the smaller and more vulnerable gorilla groups, causing them to avoid entering the bamboo zone and to miss out on the bounty of bamboo shoots.

While there are always some gorillas who leave the park during bamboo seasons, this year we have seen an unusually large number of groups doing so. So far five groups have left the park limits a total of 12 times. Titus’s group in particular has been a great concern, as they have been leaving the park on a daily basis since May 6, even building their nests and sleeping outside the park's limits and resisting trackers’ attempts to herd them back inside. Trackers have also witnessed Titus’s group causing extensive damage to nearby eucalyptus farms while out of the park.

With this marked increase in activity in the bamboo zone, the bamboo phenology project could not have come at a better time. The fifth round of data collection has just been completed, with one round still to go before the end of the season. Though the results from the study will not change the frequent occurrence of gorillas leaving the park, the results will provide much needed information about why they might be doing so and better prepare us in the future to deal with the issue as well as with the communities that are sometimes affected.