Last year we observed an unusually high number of events and activities among the mountain gorilla groups that we monitor from the Karisoke Research Center. It became clear that we would need even more field staff to help us monitor all the gorilla movements, transfers, lone gorillas and subgroups, and to continue to increase our anti-poaching patrols. 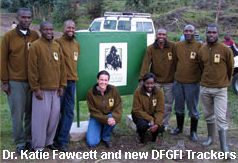 Working as a gorilla tracker or anti-poacher requires lots of different skills, including excellent physical fitness, understanding of data collection, and a very strong motivation, which is necessary to withstand the weather (cold and rainy), the altitude and the hard work involved. Thirty-one Rwandans applied for the new positions, which require a minimum of secondary school education, fluency in French or English, and passing both oral interviews and a written exam on general field knowledge about the gorillas, the national park where they live, conservation and other topics. The interviews and tests were conducted by Karisoke administrator Gaetan Nsegiyumva and field staff coordinators Fidele Uwimana and Bosco Bizumuremyi.

After this process, six candidates and two backups were then selected and invited to face a physical test, under the supervision of Jean-Bosco Bizumuremyi. This test required the candidates to climb up the Karisimbi volcano (4,504 meters high) starting from and returning to Bisate village (at 2,100 meters) in one day. All of the candidates succeeded, returning to Bisate exhausted after more than 12 hours of walking. We had found our new colleagues!

On March 26, after this extensive selection process, we were happy to welcome the following new staff to Karisoke: