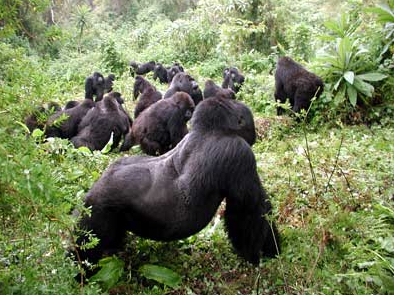 The past month was an exciting one for Beetsme's group, since there were several interactions with lone silverback gorillas. First, an unidentified lone silverback was seen moving towards Beetsme's group. He displayed continuously, beating his chest and smashing vegetation. Ubwigenge, a young silverback in Beetsme's group, was the first to react. He moved straight towards the unknown silverback, followed by Kirahure (also a young silverback). Both Ubwigenge and Kirahure displayed vigorously towards the intruder. Titus, the dominant silverback in this group, moved towards the scene of interaction but then, as often occurs in these situations, he returned to the main group for the period of the interaction, leaving the hard work to the younger members of the group. After approximately one hour, the young silverbacks of Beetsme's group returned to the main group, having effectively fended off the intruder. On the day following the interaction, our trackers were able to follow the lone silverback and take photos. After comparing these photos with those in the archives of the Karisoke Research Center, it appeared that the same lone silverback has made previous appearances in both Beetsme's and Pablo's group during 2002 and 2003.Our scientists are now searching the photo and nose-print records to determine the origin of this individual. 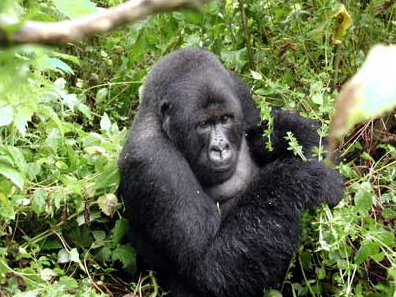 After the above interaction, Beetsme's group encountered an old friend. At the end of last year, Inshuti, a young silverback from Shinda's group, left his group. This was not too unexpected, since during the previous year he would frequently leave the group for a period of a few days, accompanied by another young silverback named Amahoro. However, this time Inshuti did not return to Shinda's group. Trackers tried to trace his movements but no sign of him was seen until the end of the month, when he was observed moving towards Beetsme's group! He interacted with the group but failed to attract any of the females. Unperturbed, he is now moving between the two groups of Beetsme and Shinda.