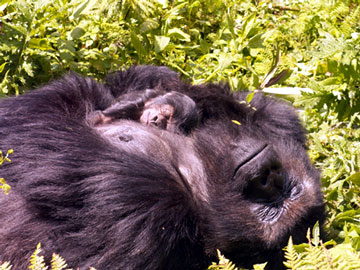 There were some interesting developments in the gorilla groups monitored by our staff at the Karisoke Research Center last month.

First, Tuck, a 33-year-old female in Group Beetsme, gave birth on Oct. 8 to an as yet unnamed male infant.
This is especially important due to Tuck's family history. Born into a different group of gorillas known as Group 5, Tuck is part of a family that is called “Effies' clan,” so named by Dian Fossey, for Tuck's mother, Effie. This family group is the most productive of all gorilla groups in the the Virungas!
Although Tuck's life has been beset with tragedy (she has lost three infants during their first month of life and one son died at 15 years old), Tuck now has four living offspring, all of whom remain in the gorilla groups monitored by Karisoke (Umuco in Pablo's group and Vuba and Urwibutso in Beetsm's group).
This latest addition to the family is also interesting due to the recent shifts in dominance in Beetsme's group. Researchers believe that it is likely that the father is Kuryama, the young pretender to the throne (i.e. leadership of the group), since Tuck spends most of her time with, and shows obvious preference for him. We shall have to wait for DNA analysis to find out for sure.

Cantsbee group on the move

Cantsbee, the dominant male of Pablo's group, has decided to take his family on walkabout this month, moving to areas where they have previously never been.
Possibly due to the persistent attentions of a lone silverback, the group has left its normal home range, first moving toward Mt. Visoke and the original Karisoke location. The group then veered northwards toward the Congolese sector of the forest. Not only was this a worry due to the general insecurity of the Congo but also due to the difficulties of patrolling this region.
On one day alone, Karisoke trackers found and destroyed a total of 27 snares close to the group while in this region. Fortunately, both Cantsbee and his second in command, Pablo, are experienced with snares and Pablo was seen walking ahead of the group, snapping the bamboo poles of the snares.
It is perhaps due to this high human activity that the group soon moved off again, since there was certainly no shortage of food in this region. However, they did not go back to their old stomping ground but instead moved westward around the north slopes of Visoke to emerge back into Rwanda, in the bamboo forests between Visoke and Sabyinyo where they remain at the time of writing.
As if this was not enough drama for one month, a day after their return to Rwanda, Pablo's group interacted with an unhabituated group of gorillas!
Gufasha transfers to another group
Those of you who have been keeping up with Karisoke news will know that Gufasha, an 8-year-old female from Beetsme's group, transferred to Pablo's group during an interaction in July of this year. After the initial period of aggression, especially by the resident females in her new group, Gufasha seemed to be settling in well.
It came as a bit of a surprise to everyone, therefore, when Gufasha chose to transfer to the unhabituated group during the interaction. Since this event, a team of Karisoke trackers have followed the group and done several consecutive nest counts and the wild group appears to consist of around 24 individuals and includes no less than five full-grown silverbacks!
We can only hope that Gufasha has learned from her transfer into Pablo's group and will suffer less stress settling into this new group. The staff here wish her all the best and will miss seeing her in the research groups we follow regularly.