I am Ildephonse Munyarugero, manager of the Fossey Fund's Ecosystem Health and Community Development Program in Rwanda, a program that seeks to create a healthy environment for both people and gorillas by supporting, among other projects, rural clinics. The Bisate Clinic has been our main focus since 2002. We have made many improvements in this facility, and I am happy to report on one more that is well underway.

This rural health center is located close to Volcanoes National Park, home to the mountain gorillas. It opened its doors in the 1970s with a tiny space that could not allow the provision of adequate quality health services. One problem was that it has been housing sick men, women and children in the same building. This mixed-gender and mixed-age hospitalization was suspected on several occasions to be one of the routes for cross-transmission of disease, and no privacy for patients was possible. It was hardly a place where sick people preferred to go. 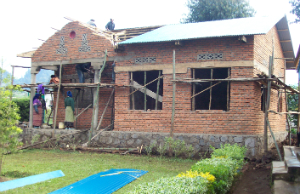 With support from the Fossey Fund, this clinic is now able to provide greatly improved primary health care. Significant progress has been made in three core areas: 1) infrastructure 2) capacity building and 3) community participation in clinic activities. (See here for more information and photos.)

Recently, the Fossey Fund obtained donations for construction of a new hospital building. This new bloc will include a men's ward (seven beds), a children's ward (five beds), a distribution pharmacy and an area for injections. It will also have a rainwater collection system. I expect it to be finished early in August 2011.

We thank Judith C. Harris, Rebecca F. Rooney, the De Koornzaayer Foundation, Richard A. Horder and Dr. Mary Horder for their contributions to this project.