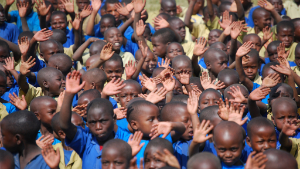 The moment the vehicle caravan swerves left from the bumpy main road onto the Bisate school's dirt parking lot, the vast grass field between the classroom blocks becomes electric. Instantly, several hundred children start waving and singing, their small hands high up in the air, their voices fresh and clear.

Neatly dressed in blue and light khaki school uniforms, girls and boys from the primary and secondary school are warmly welcoming their visitors. Today, continuing a process that began years ago, the Fossey Fund and its partners are here to both help and honor Bisate School, as well as the community at large.
Until now, thousands of textbooks, notebooks and various other supplies have filled the library shelves and students’ school bags. But today’s event is radically different in both nature and scope. Through the dedicated effort of the East African Children’s Education Fund (EACEF), a nonprofit organized by students at The Westminster Schools in Atlanta, Georgia, and the Fossey Fund’s substantial logistical support on the ground, Bisate School now enjoys a brand new classroom block, where 600 first year primary students will study in two daily shifts. 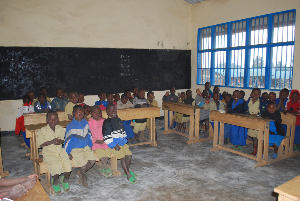 The building replaces an old mud structure that collapsed last year – luckily on a weekend day, thus not injuring anyone. By coincidence, right around that time, Swinton Griffith, an 18-year-old EACEF member from Atlanta, was visiting Rwanda with his family. Struck by the misfortune at Bisate, Swinton vowed to raise the money and help erect a modern classroom block. A few months and $119,000 later, the school was indeed gifted with the fully equipped, state-of-the-art new building.
Applauding this incredible achievement, Marie Christine Gasingirwa, the director general for science, technology and research in Rwanda’s Ministry of Education, emphasized that Bisate's students and teachers have a big responsibility as well. 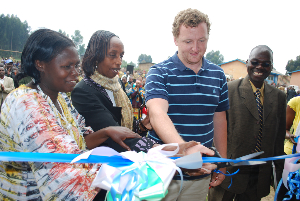 “We expect a lot from the Bisate School, in terms of promoting proper education and the welfare of the people, both in this area and Rwanda in general,” Gasingirwa said.
The Bisate School has enjoyed a relationship with the Fossey Fund since 2004. Most of the Karisoke™ Research Center staff have children who study here. Furthermore, the school has served as a gateway for Karisoke’s community conservation strategy, reminding parents that they can translate their gratitude for the support given to their children’s education into active support for conservation of the gorillas and their habitat. 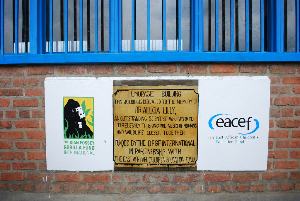 In addition to the new classroom block, the Bisate School will also benefit from two rainwater harvesting tanks, which will provide students, teachers and the community with precious clean water. The tanks are part of a larger project that the Fossey Fund implemented this year in cooperation with the Rotary Club, overhauling the inadequate system in place since the 1960s. In a region where water scarcity is a pervasive problem, Bisate was in particular need of a new water system due to its proximity to Volcanoes National Park, in order to minimize the threats posed by people’s incursions into the forest in search for clean water.