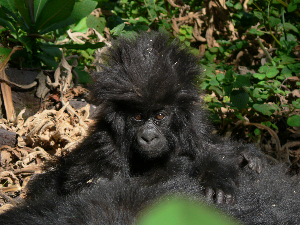 In a very rare case of presumed infanticide within a gorilla group, seven-month-old infant Agatako was killed yesterday, when his mother, Bukima, who was carrying him, was attacked by blackback Kubaha. Taking advantage of the fact that the dominant silverback Isabukuru was away for several hours, Kubaha was aggressive all morning towards all the females in his group.

“Most of the time, Kubaha displayed with chest beats and plant smashing and was tight-lipped and strut-standing towards group members. He was obviously nervous and uptight,” said Joel Glick, the Karisoke Research Center’s interim Gorilla Program coordinator, who was collecting data in Isabukuru’s group at the time.

It is unclear whether Kubaha, who is 11 years old and has not yet reached sexual maturity, was nervous about having to lead the females, or whether he was trying to attract their attention by showing off his strength, or both. 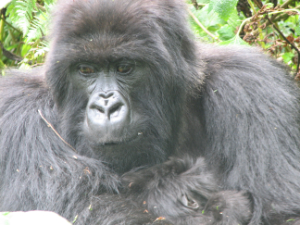 With tension mounting and females occasionally responding to his aggressions with gestures of appeasement or aggression, Kubaha launched a fierce attack against Bukima, who was behind a thick bush on the edge of the mountain. Her loud screams alerted the other females, who ran towards Kubaha. It was then, at noon, that Agatako, who was clinging to his mother, lost his life. However, the view was obscured for observers, so they could not establish beyond any doubt whether Kubaha directly targeted him, or whether he died in the interaction between the aggressor and his mother. Neither Bukima nor the other females sustained any injuries.

By the time Glick reached the group at the bottom of the mountain, just four minutes after Kubaha’s attack, Bukima was carrying her dead infant away from the other gorillas. His tiny body was covered in blood. When she finally laid him on the ground, every individual in the group approached him with curiosity. Bukima paced nervously, as though trying to decide whether to look for Isabukuru’s trail or watch over her dead infant.

This would not, however, be the end of the drama for the day. Kubaha next approached the dead body and started to display with it, as some of the females screamed.

“It was absolutely horrible,” said Glick, visibly shaken. “Kubaha flung the body in the air several times, let it drop to the ground, then dragged it all over the place. He even chest-beat while holding the body in one hand. There was blood everywhere.”

This lasted for 15 minutes, after which Kubaha finally set down Agatako’s body. It was later recovered by the veterinarians, whose preliminary report indicated “deep puncture wounds,” most likely from canine teeth. This would indicate that Kubaha indeed bit Agatako.

A short while afterward, silverback Isabukuru returned to the group, unaware of what had happened in his absence. He had spent the morning some 600 meters away, trailing another gorilla group in the vicinity, according to the trackers who followed him. He stared in the direction he had come from and displayed three times, then all was quiet, with no further aggressions.

Ironically, Isabukuru himself was responsible for the only other case of presumed intra-group infanticide ever recorded, when he was still a blackback in Pablo’s group, in December 2006. Soon after he killed one infant there, he left together with a few females and started the new group that is named after him.

Agatako was born on January 26. He was healthy, and Bukima was taking good care of him. He received his name – which means “ornament” in the local Kinyarwandan language – during the Kwita Izina ceremony last month. He was Bukima’s third offspring. Her previous infants all died as well.