A Tribute to Esdras Nsengiyumva 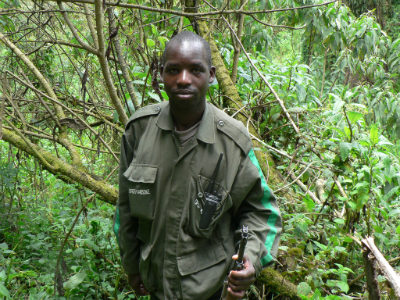 On Dec. 2, 2012, one of the Dian Fossey Gorilla Fund International’s anti-poaching camps near Volcanoes National Park was attacked, and a member of our anti-poaching team – Esdras Nsengiyumva – was killed by gunfire. Our other rangers escaped and one suffered injuries due to a fall while getting away. According to Rwandan officials, the attack was carried out by the DR Congo-based FDLR. The camp was heavily damaged in the process and equipment was taken.

The Fossey Fund is deeply saddened to have to add the name of Esdras Nsengiyumva to the list of those who have lost their lives while trying to protect the endangered mountain gorillas, a list that includes Dian Fossey herself.

Esdras Nsengiyumva began working with Fossey Fund in March 2009 as a tracker in Titus’ group. His very high score on the recruitment exam proved to be a good indicator of the dedicated and talented tracker he would become. After Nsengiyumva’s work in Titus’ group, he joined Isabukuru’s team, where he was a tracker until January 2012, when he began working with our anti-poaching team.

Nsengiyumva lived with his family in Kinigi, not far from Volcanoes National Park. He died at the age of 33, leaving behind a wife, Twagirayesu Dumytila and a daughter, 3-year-old Irahoza Alliance. 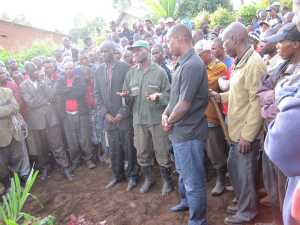 Everyone at the Fossey Fund is very grateful for Nsengiyumva’s years of service and for the variety of roles he played in monitoring gorillas, both as a tracker and as a member of the anti-poaching team. His loss is deeply felt by all who knew him and worked with him.

Veronica Vecellio, the Fossey Fund’s gorilla program coordinator says, “Everyone always enjoyed sharing a day in the forest with Esdras. He was always smiling and in a good mood even on days with severe conditions. Because of his fluency in French and some knowledge of English, he often initiated interesting and entertaining conversations. Despite his short experience in the field he soon developed a bright confidence and knowledge of the forest and gorilla behavior. We will miss him.”

The Fossey Fund is providing assistance to Nsengiyumva’s family and we are determined to rebuild the anti-poaching camp and carry on our gorilla protection work fully, despite these difficult times.