Bringing Gorilla Conservation Partners Together at the Karisoke Research Center 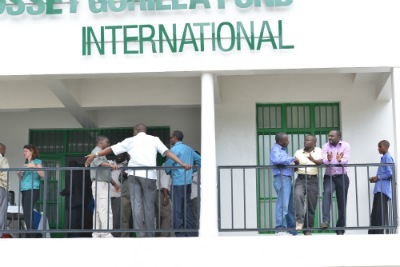 Representatives from RDB first presented the research actions and priorities for Volcanoes National Park. In light of RDB’s management plan, other partners also described their work. Stoinski discussed preliminary results and recent publications from Fossey Fund scientists and collaborating researchers. Among these were an assessment of vegetation patterns in Volcanoes National Park; analysis of mountain gorilla ranging patterns; and physiology, parasitology, and behavior in mountain gorillas. Stoinski also provided updates on some of the ongoing research and monitoring projects at the Karisoke Research Center, which extend beyond long-term data collection on the behavior and ecology of mountain gorillas to include monitoring of birds and amphibians, behavioral monitoring of golden monkeys, and bamboo phenology. Other organizations, including IGCP and Gorilla Doctors, presented work related to epidemiology in humans and gorillas, public health and climate change, among other topics. Representatives from WCS working in Nyungwe National Park in southwestern Rwanda also shared the conservation challenges they face and their research priorities, which was a welcome addition to a meeting that was otherwise focused on conservation activities in Volcanoes National Park.

Several areas for potential collaboration sprang from these exchanges. For example, the Fossey Fund has been progressively implementing the use of Cybertracker software for collecting data electronically throughout various programs, moving away from the traditional paper and pencil. The anti-poaching team began using Cybertracker at the beginning of 2103 to collect data on illegal activities. Field staff and researchers are now working on extending the use of Cybertracker to collect the Ranger Based Monitoring data, which feeds into the work of both RDB and IGCP. The Fossey Fund and Gorilla Doctors also discussed their ongoing collaboration with respect to data collection about gorilla health and the potential for electronic data collection methods to better streamline the process of transmitting data from the field into databases.

The partners agreed to meet in smaller groups over the course of the next several months to follow up on some of the issues and collaborations proposed at the meeting in November. We are interested to see what emerges from these discussions, and look forward to reporting on them as they develop.

Thanks to Cleveland Zoo for supporting Fossey staff to attend the meeting. We are also grateful to The Milton and Tamar Maltz Family Foundation, Oracle, Orange County Community Foundation, Turner Foundation, US Fish & Wildlife Service, and Gorilla Council members, as well as our sponsors, members and donors for their generous support of our protection and monitoring programs both in Rwanda and in Congo. We could not continue our studies and protection without the contributions from those who understand the importance of a daily presence in the forest to the survival of gorillas.