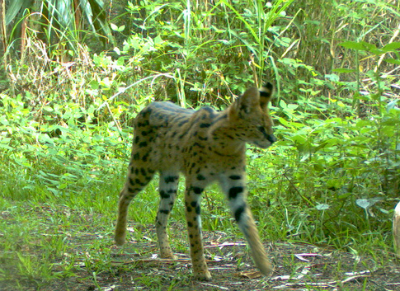 The Dian Fossey Gorilla Fund’s biodiversity research and monitoring program has launched an exciting new project to use automatically operated cameras placed in the forest to survey carnivores and other animals in Volcanoes National Park in Rwanda.

The presence of carnivores within any natural habitat is a good indicator of an ecosystem’s overall health. Because carnivores are at the top of the food chain, their presence naturally implies the existence of other creatures, such as smaller carnivores and herbivores, which they prey upon. Protection of areas that contain populations of small-to-medium carnivores can result in the preservation of a whole range of both animal and plant species, as well as maintain the general integrity of an ecosystem.

Monitoring carnivores is important to the Fossey Fund. As Deogratias Tuyisingize, coordinator of the biodiversity program and designer of the camera trap study, puts it: “We need the data to better understand the status, ecology and needs of carnivores and threats to their survival, as well as their interactions with other animal species. We need this crucial information to better understand the unique ecosystem that is the Virungas, and to make well-informed decisions while conserving this ecosystem.”

In spite of their vital ecological role as top mammalian predators, no focused studies have been conducted to confirm carnivore species’ density or diversity within the park. Assessing the status of rare and nocturnal carnivores within the park is extremely difficult because they are elusive and rarely allow themselves to be seen by humans. Volcanoes National Park is thought to be home to a variety of carnivores, including several extremely rare and endangered species such as the African golden cat and the serval.

The use of camera traps allows for non-invasive data gathering, and provides opportunities to detect species that are generally extremely difficult to survey using the most common techniques, such as scat analysis and identification of tracks and trails.  The project, launched in late January, used five passive, heat-sensitive cameras on loan from the Wildlife Conservation Society-Rwanda to quantify and qualify the presence of carnivores within Volcanoes National Park. The camera trap locations were chosen to represent a variety of habitats and altitudes within the park that experience infrequent human activity. To ensure best results, each camera was moved to a different site every two weeks. Collaboration with the local park authorities, the Rwanda Development Board, has been essential to the design and implementation of the project.

The project concluded in April, as the cameras and other field materials had been borrowed for only three months. Due to these limitations, this study is considered only a pilot project for research that the Fossey Fund hopes can continue. But even in the short time the camera traps have been in place, they have yielded a lot of exciting results. Thus far, the traps have photographed five species of carnivores, including the serval, African civet, genet, mongoose and side-striped jackal, in addition to four herbivores, including the gorilla, buffalo, bushbuck and duiker.

For Tuyisingize and the rest of the Fossey Fund team, the preliminary results have provided some surprising insights into both carnivores and gorillas in the park. “There have always been rumors about the presence of leopards in Volcanoes National Park, even reports from scientists dating back to the 1920’s, but there has never been any proof. We have not captured any photos of leopards, but we have seen many more servals than expected, and I’m pretty sure that any alleged leopard sightings have just been misidentifications of the serval.” 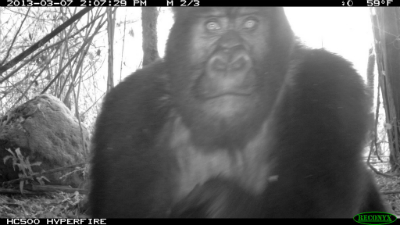 Though the Fossey Fund does not use camera traps to find gorillas, the results, nonetheless, have been surprising with regard to gorillas as well. We have found that the gorillas were not just photographed by the cameras, but in fact they also interacted with them. “It has been amazing to watch the gorillas actually see the cameras, and go up to them and inspect them,” says Tuyisingize.

The camera traps could also be useful in tracking illegal activity in the park, such as the presence and movement of poachers, though they are not currently being used to do so. According to Tuyisingize, “The use of the camera traps goes beyond just being a study of carnivores, you can use them to help fight illegal activities in the park, and to gain a better understanding of the ecosystem as whole.”

The staff at the Fossey Fund is very excited about the preliminary results of the study. Not only do the traps provide invaluable data and beautiful photographs on rarely-seen carnivores, they also offer a better understanding of the threats within the park. Tuyisingize and the rest of the Fossey Fund team hope that we will one day have our own cameras not only to continue the study of the presence and prevalence of carnivores, but also to support the overall health of the forest, and, of course, the gorillas.