We Celebrate Fundi’s 20 Years of Service 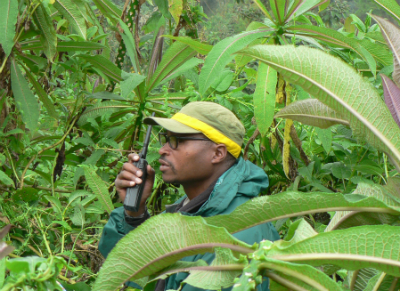 Jean Damascene Hategekimana, or Fundi, as he is better known to his friends and colleagues, is celebrating 20 years with the Dian Fossey Gorilla Fund International this December. From cook to field logistics coordinator, Fundi has served the organization in several different capacities through both difficult times and times of growth.
Fundi began working for the Fossey Fund as a cook in 1993, when the Karisoke Research Center was still located in the forest. Although Fundi’s first job with the Fossey Fund was not a field position, he always volunteered to replace field staff when one of them was unable to work. Through these occasional excursions to the gorillas, the Karisoke team discovered that Fundi was very adept at fieldwork. This is not surprising, given that Fundi grew up in the area around Volcanoes National Park. In fact, his brothers worked with gorillas too and Fundi himself used to be a porter before he became the Karisoke cook.

Fundi became the data technician for Shinda’s group in 1994. Silverback Shinda was notorious for being one of the more aggressive silverbacks the Fossey Fund monitored, and he had a history of biting trackers and researchers. Nevertheless, Fundi appreciated the silverback. When asked about Shinda after his death, Fundi recalled, “Shinda and I were good friends; he bit me once, then after that he was no longer afraid of me and he came to accept me as part of the group, or part of the family…. When he died, I was very sad.”

Fossey Fund staff who worked with Fundi during his time with Shinda’s group always recall Fundi’s help in dealing with the often difficult group. Prosper Uwingeli, Chief Warden of Volcanoes National Park, who used to work with the Gorilla Program at Karisoke, recalls that Shinda’s group was the first gorilla group he visited. It was Fundi who helped him find his first focal animal. Veronica Vecellio, gorilla program coordinator, says, “It’s simply incredible the relationship that Fundi has with the gorillas, particularly when I remember the time when Shinda was still alive. Because of his natural talent with gorillas we could always count on Fundi when we were coping with even the most stressful events.” 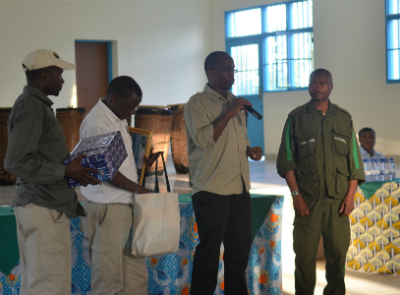 Although he was indispensable in dealing with the temperamental silverback Shinda, when asked if he has had any favorite gorillas over the years, the ones that hold a special place in Fundi’s heart are the gorillas who were calm and peaceful, including silverback Ugenda and females Simba and Pandora. He says, “Simba was peaceful, and Pandora was vulnerable. One of Pandora’s eyes didn’t work and she had one finger that was not normal. I always sympathized with her.”

One of the most interesting things that Fundi remembers from his work in Shinda’s group was that Shinda seemed to be aware of the danger of snares. Shinda frequently destroyed snares, and when he did not destroy them, he could often be seen sitting near them. Fundi is sure that Shinda did this to prevent youngsters approaching the snare and getting caught.

In his current dual position as a data technician in Ugenda’s group and field logistics coordinator, Fundi balances the work of collecting data with managing the teams in the field. He coordinates with Fossey Fund staff, park authorities, and other partners to make sure that each Fossey Fund-monitored gorilla group is visited every day and that all research and monitoring priorities are met. It’s a lot to juggle, but somehow Fundi seems to retain his calm demeanor even on the most hectic of days. Winnie Eckardt, Ph.D., a Fossey Fund post-doctoral fellow who has been doing fieldwork for a study on stress in mountain gorillas, commented that even on the most stressful of days, Fundi always stays levelheaded.

Since Fundi began working with the Fossey Fund in 1993, the organization has grown and changed a great deal. Besides accompanying the Fund in its move from Karisoke’s original location in the forest to its offices in the city of Musanze and now to its new regional research center, Fundi also notes that as the organization has expanded its programs and increased its staff, it has hired more Rwandan research assistants and involved the trackers in data collection. He is happy to see these developments. 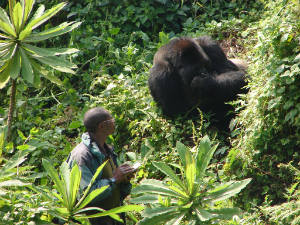 Karisoke Research Center Director Felix Ndagijimana says, “As colleagues, we are very proud of Fundi, his love for gorillas and continued commitment to their conservation even during difficult times. Particularly, I feel privileged to have been accompanied by Fundi on my first trip to gorillas when we went to see Shinda’s group. Like many scientists and researchers who have worked with Fundi over the years, I am amazed by his knowledge of gorillas, their behaviors and his love for his job. I greatly benefited from the countless hours spent with Fundi in Shinda’s group during my training. None of the Fossey Fund’s research and conservation activities would be possible without hardworking, dedicated people like Fundi. Fundi serves as an ambassador for gorilla conservation in his community and to other Rwandans in general. His devotion is an example to the new generation of trackers.”

Fundi says, “I’m proud to have worked with Karisoke for 20 years. I’m committed to spending 20 more years working here, if my life allows for it.” Certainly, the sentiment is reciprocated by everyone at the Fossey Fund who has had the pleasure of working with Fundi over the years.