“Little did I know then that by setting up two small tents in the wilderness of the Virungas I had launched the beginnings of what was to become an internationally renowned research station eventually to be utilized by students and scientists from many countries.” — Dian Fossey, writing in her book “Gorillas in the Mist,” about the founding of the “Karisoke” Research Center, a name she created from the nearby Mt. Karisimbi and Mt. Visoke. 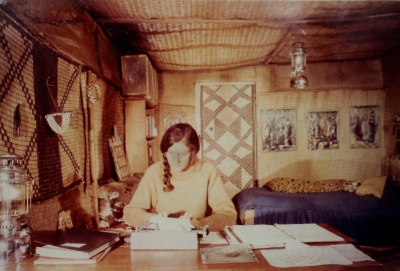 Today, on the 48th anniversary of the founding of Karisoke, we wonder whether Dian Fossey could have imagined just how much further her pioneering efforts might go. She thought mountain gorillas, which reached a low of some 240 during her lifetime, might well go extinct before the end of the last century. Instead, due to the intensive monitoring, protection and study carried out since her death, their numbers have doubled. They are indeed the only great ape whose numbers are known to be increasing, with most others declining rapidly. And in addition, most of what is now scientifically known about gorillas is based on work that was done at Karisoke or utilizing the incredible, long-term database of information that has been amassed there.

The Dian Fossey Gorilla Fund, founded by Dian Fossey as the Digit Fund, is both proud and humbled to carry on and expand Dian’s legacy. The story of Karisoke is one of enormous perseverance, courage and vision, on the part of hundreds of staff and researchers, and supporters from all over the world, as well as Fossey herself. As our story continues, we look forward to many more years of saving gorillas and thank you for being a part of this incredible journey.