Change in dominance for Pablo’s group? 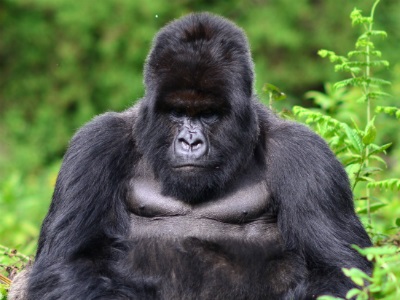 Historic leader Cantsbee, who turned 37 years old on Nov. 14, has been the leader of Pablo’s group of mountain gorillas for more than two decades, the longest reign of dominance the Fossey Fund has ever observed. However, in early December, there was a clear challenge to Cantsbee’s dominance from his son Gicurasi, the second-ranking silverback.

This isn’t the first time the 20-year-old silverback has tried to displace his father; beginning a few years ago, Gicurasi has attempted to assert his dominance over Cantsbee but unsuccessfully. Gicurasi has managed to gain sexual attention from the females of the group, but Cantsbee still leads the group and is supported by a large number of gorillas. This balance of dominance between the two silverbacks has meant a peaceful coexistence for many months. During the first week of December, though, staff observed an unexpected dominant behavior from Gicurasi.

While the group was resting, Gicurasi approached Cantsbee and another silverback, Kureba, who was nearby. Kureba and Cantsbee loudly pig grunted at Gicurasi, a vocalization to express irritation, but he did not stop approaching Cantsbee. As Gicurasi came within a few meters, Cantsbee stepped back and made room for Gicurasi to pass through. Research Assistant Eric Ndayishimiye witnessed the event and said he was astonished because it’s very rare for Cantsbee to be subject to behavior like that. This seemingly small act informs us that changes in leadership may be closer than expected.