I recently completed the field research for my Ph.D. dissertation on how the socio-sexual behaviors of female mountain gorillas correlate with their hormones, which I discussed in my first blog on May 8, 2011. I would like to thank the Leakey Foundation's Baldwin Fellowship Program and other donors for their support of my project, and give you all some idea of what the field work was like. 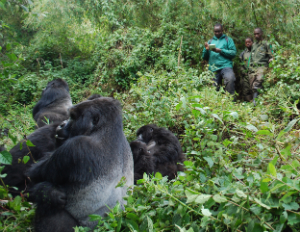 I conducted the research in the Virungas, under the auspices of the Karisoke Research Center, from April 2010 to March 2011. The field work was indeed demanding but mostly enjoyable. Each day, I had to wake up early, prepare my field equipment, go to our intermediary laboratory and pick up the dry ice packs from the freezer to take into the forest. At 7:00 am, I joined other Karisoke researchers in the car to Virunga National Park. Depending on the previous location of the gorillas, I was dropped at the closest parking area, which was usually around 2.5 km from the edge of the park. Before I entered the forest, an advance team of gorilla trackers would confirm by radio the right trail to use. It typically took between one and three hours to reach the group.

It was always a pleasure to stay with gorillas during four hours to record their behaviors. When the focal individual was observed urinating and/or defecating, I kept watching at that place until all gorillas had moved at least seven meters away. Then, I used a plastic bag to collect faeces and a pipette for urine. I labelled the samples and immediately put them in the isotherm bags until I got back at the Karisoke offices to store them in the freezer.

To monitor the reproductive cycles of the gorillas we are required to collect fecal and/or urine samples on nearly a daily basis from the same individual. Some days were immediately successful if we were able to collect a sample within the first hour or so of observations. Other days were more frustrating, when even after following a particular female for four hours we were still unable to get a sample – but it was up to the gorilla, not us, to provide it. In addition, some days were difficult if the gorillas were far away or if there was a lot of rain. Often, gorillas from the same mother crowd together under a single shelter (a tree) so that it is difficult to observe each individual. I would typically do field work for four to five days per week and was always ready for a few days off by the end of the week.

At the end of the field work, I felt really indebted to many people: my sponsors, my supervisors, and the Karisoke staff. I chose a Rwandese way to thank especially all the Karisoke field staff by offering each person one drink. Everybody was happy that I recognized their help with the project. But even though it has been a long year, a lot of work remains for me, with all the laboratory analysis and writing up the results. I will continue to work hard, and hope the next steps will be as interesting and successful as the year I have just completed.