As a result of killings this summer among the mountain gorillas in Virunga National Park in Congo (DRC), DFGFI has been caring for two gorilla infants that became “orphaned” as a result of these events. On June 9, a female gorilla, Rugiba, from the Kabirizi tourist group was shot and killed by unknown assailants in the Mikeno sector of the park and the following day her body was found with her 2-month-old infant, Ndakasi, clinging to it. The infant was taken to Bukima by Congolese park guards (from ICCN) until she could be brought to the town of Goma the following day, where she was to be cared for in a DFGFI facility. This building had been rented especially for such a situation, since experience had told us that more gorilla poaching could be expected, with infants brought to Goma for attempted sale, although we were expecting more Grauer’s gorillas (eastern lowland) rather than mountain gorillas. 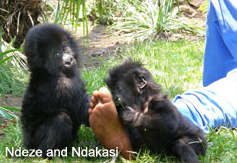 Upon arrival, this first infant – named Ndakasi — was examined by veterinarians from the Mountain Gorilla Veterinary Project (MGVP) and a care regime was established for the two ICCN guards that were assigned to care for her. Both of these guards have worked with confiscated gorillas before, notably Andre Bauma, an experienced tracker and qualified veterinary technician who was the primary caregiver for Tumaini in 2006 (Tumaini was around the same age as Ndakasi when confiscated).

Ndakasi was weaned onto Guigoz baby milk formula (which has been used for all of the small gorilla infants), which she took to without problems and immediately began to put on weight. Unfortunately, on June 21, she began to struggle for breath, signalling the beginning of a life-threatening illness which, although serious, was successfully treated by MGVP veterinarians with the invaluable help of an Indian medical unit which is part of the MONUC (United Nations peacekeeping mission) operations in Goma. Since this time, Ndakasi has made a complete recovery and is now feeding (and growing) healthily. 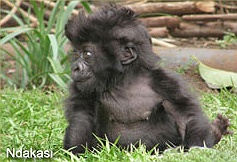 Everyone involved immediately began discussing how to go about caring for this solitary infant (rearing a gorilla from so young an age without the presence of other gorillas could lead to serious behavioral problems in later life). Little did we know that tragedy was to strike again so soon….

On July 24, we learned that four gorillas had been killed in the Rugendo tourist group in DRC. This tragedy was worsened by the fact that Safari, the mother of a 5-month-old female baby named Ndeze, was one of those killed and the infant was now being carried by a young blackback. There is no way that a gorilla so young could survive without its mother, even if other family members provided warmth, comfort and protection, since at this age they are wholly dependent on breast milk for nutrition. After frenetic discussion among ICCN, DFGFI and MGVP, the difficult decision was made for veterinarians to visit the group and, after evaluating the situation, retrieve Ndeze in order to salvage some hope from this terrible situation. 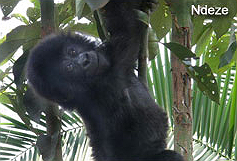 So, on the following day Ndeze was rescued from certain death due to malnutrition and brought to DFGFI’s Goma facility, where she could be cared for along with Ndakasi. On this first day she eagerly drank infant formula, demonstrating that she was already experiencing dehydration. Although she was aggressive to begin with, the need for physical contact and the compassion and tenderness shown to her by Andre Bauma soon won her over and she began to adapt to her new situation.

Ndeze, although only 3 months older than Ndakasi, is generally more advanced mentally and physically, making her more independent and active. We expect that Ndakasi will soon catch up though and that they will make inseparable playmates as they grow up. Both infants are together, with a primary caregiver for each one to act as their respective mothers round the clock, following a 30-day health quarantine. This regime is intended to be as close to the natural situation as possible, with each infant having a “mother” to give comfort and security, as well as a larger social grouping in which to develop a natural social awareness.

Update on Other Confiscated Gorillas in Kinigi Facility

The group of six Grauer's gorillas (Ntabwoba, Pinga, Itebero, Serafuli, Dunia and Tumaini) and one mountain gorilla (Maisha) at DFGFI’s Interim Quarantine Facility in Kinigi, Rwanda, continues to do well. They have become clearly more cohesive as a group and social relationships have developed significantly over the last few months. 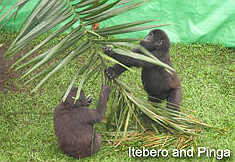 The most noticeable improvement in behavior has come from Ntabwoba, whose prior years being brought up without other gorillas for company and young age at capture had “humanized” him to a large degree. This initially made him difficult to integrate with Maisha (they were the first to meet in Kinigi) and with each new addition to the facility he has been the last to accept them, being intimidated by the increasing number of boisterous females (Ntabwoba is the only male). However, over time he has accepted that he has to share, not only his food, but his favorite caregivers too! He has now fully integrated in the group and, although sometimes on the periphery, he can usually be seen playing with another individual and, as time goes by, he relies less and less on the humans in the group for company. He has obviously discovered that it’s far more fun playing with another gorilla as he can play rougher and bite harder without them giving up!

In March of this year another gorilla was confiscated in Gisenyi, Rwanda. Believed to be a 3-year-old mountain gorilla, Kaboko was probably caught in a snare set for antelope by poachers, as he had an obvious snare wound around his wrist. Unfortunately this wound had been left untreated for too long and his right hand had to be removed by MGVP veterinarians. He has adapted to his disability remarkably well and within days of the operation he was seen manipulating his food with his feet, showing remarkable dexterity. After a month spent in quarantine in Ruhengeri, Kaboko was brought up to the Kinigi facility and placed in an enclosure adjoining the existing group.

Kaboko’s full introduction into the group has been delayed due to his healing injury and also due to the fact that it has taken him a long time to become habituated to his human caregivers. This is most likely due to his advanced age when he was poached, making him that little bit wilder than younger animals that are more adaptable. However, he has now accepted his new situation and has grown to trust his guardians, even playing with them on occasion. During the months that he has been here he has also become accustomed to the rest of the gorillas, with whom he has contact through a fence, which should make his integration into the group easier than a so called “hard” introduction. This introduction will take place in the early weeks of September.