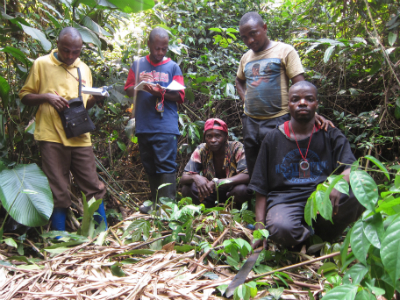 Field staff from the Dian Fossey Gorilla Fund’s Grauer’s Gorilla Conservation and Research Program completed surveys of a large block of unprotected primary forest in the Walikale territory of the Democratic Republic of Congo during 2013.

Two teams, led by Urbain Ngobobo, director of the Fossey Fund’s Grauer’s Gorilla Research and Conservation Program, and Escobar Binyinyi, a GIS specialist and the program’s field coordinator, split the work over the course of 20 patrols. They looked for signs of endangered Grauer’s gorillas, including feeding remains, knuckle prints, dung, and nest sites, while at the same time taking note of the presence and abundance of other mammals and human activities such as mining and hunting.

Although the gorillas are present in the forest at much lower densities than are mountain gorillas in the Virunga Massif, this was to be expected given that the gorillas’ primary food plants are less abundant here. The field staff have found evidence of at least 10 Grauer’s gorilla groups over the course of their surveys and can make estimates about their composition, including the number of silverbacks, adult females, and young gorillas in each group, based on the makeup of the nest sites and the size of the dung found within them. 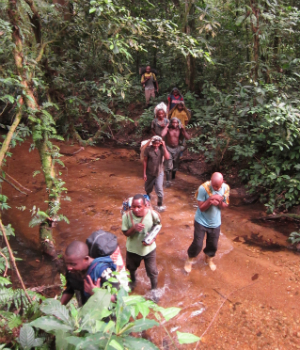 Damien Caillaud, D.V.M., Ph.D., the program’s director of research, has accompanied the teams on several patrols to train the field staff on techniques and methods for data collection. During their patrols trackers use compasses to stay on a course plotted in advance by Caillaud, collecting data tagged with specific GPS points as they go. By surveying these swaths of forest and collecting data, the trackers are making it possible to get a picture of the life — human and animal — teeming within. Together Binyinyi and Caillaud have begun producing some preliminary maps of the territory, showing the presence and distribution of gorillas, various species of mammals, and hunting and mining activities. They are now preparing these data to be published in an international scientific journal.

The next step will be for trackers to begin following specific focal gorilla groups at a distance in order to better understand their ranging habits, diet, and genetic diversity using DNA extracted from fecal samples. Based on the data gathered in the 2013 patrols, the Fossey Fund is now ready to identify a few specific gorilla groups that are good candidates for tracking in the coming year.

“This research is important because it comes at a time when Grauer’s gorilla populations are highly threatened,” Caillaud says. “There is poaching, habitat loss, and an infant gorilla trade occurring in the forests where they live, but we don’t know to what extent and how susceptible the gorilla population is to these threats.”

Despite the threats faced by all animals living in the forest, during their patrols field staff heard groups of chimpanzees vocalizing and gorillas chest beating, saw large groups of arboreal primates, and even spotted footprints of the very rare bongo, the largest species of forest antelope.

The Fossey Fund’s Grauer’s Gorilla Research and Conservation Program was initiated in 2011 with the support of a $1 million commitment from Ted Turner and subsequent additional support from an anonymous foundation to help stop the rapid decline of the endangered Grauer’s gorilla through extreme conservation methods pioneered by the Dian Fossey Gorilla Fund International.

Right now, the forest where the Fossey Fund is conducting its research is not under the protection of Congolese park authorities, and villagers use the forest to get protein (bush meat), fruit, minerals (including coltan and cassiterite), and medicinal plants. Unfortunately, some of these practices are not sustainable in the long run — hunting with rifles in particular. But the communities are becoming aware of the risks and have expressed interest in developing new management practices. The Fossey Fund’s research will help communities regulate the use of their forests with policies grounded in reliable scientific data. Over the next few months, Fossey Fund representatives will meet with traditional leaders and land users to share the preliminary results of their work.

We are grateful to The Milton and Tamar Maltz Family Foundation, Turner Foundation, an anonymous foundation and Gorilla Council members, as well as our sponsors, members and donors for their generous support of our research and monitoring program in Congo. We could not continue our work without the contributions from those who understand the importance of a sustained presence in the forest to the survival of gorillas.