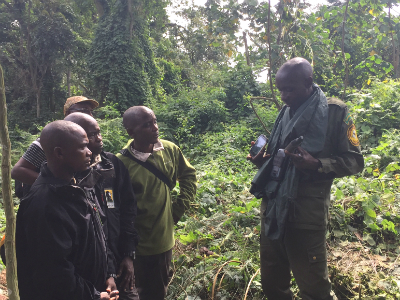 One cornerstone of the Fossey Fund’s work is capacity building within the areas where we work in Africa and generating collaboration among individuals and organizations committed to saving gorillas. The Karisoke Research Center in Rwanda has established itself as a place where capacity building is prominent, visible through partnerships with schools, local community involvement and our investment in staff advancement, such as that of Felix Ndagijimana from research assistant to his current position as director of all our programs in Rwanda.

During the past few months, our programs in Congo have also made significant strides in collaboration and capacity building. In February, Fossey Fund staff from our field site in Nkuba-Biruwe travelled to our other Congo field site, Kahuzi-Biega National Park. Unlike the unhabituated Grauer’s gorillas we track and monitor from a distance at our Nkuba site, Kahuzi-Biega is the home to the only group of habituated Grauer’s gorillas, and for many of our Nkuba staff, this was the first time seeing a gorilla family so close.

Dr. Damien Caillaud and Fossey Fund President/CEO and Chief Scientific Officer Dr. Tara Stoinski also travelled to Kahuzi-Biega for the collaboration. The trip was designed to: increase motivation by providing the opportunity for our staff to see gorillas; build a relationship with the wildlife authorities in Congo and learn about ecotourism; and develop a connection that our staff can share with their respective communities.

Many of our Nkuba staff members were hunters before becoming conservationists and had never seen a gorilla this close before, even while monitoring gorilla presence in the forest near Nkuba. Since the gorilla population we protect at that field site is not acclimated to human proximity, our trackers use remote camera traps and follow the gorillas at a day’s distance. Only rarely do they see the shadow of a gorilla moving in the forest or do they hear the bark of a silverback telling them to keep their distance.

At Kahuzi-Biega, our Nkuba staff was able to observe habituated Grauer’s gorillas in a much closer setting and learn more about the similarities between great apes and humans, while visiting Chimanuka’s group. Lambert Cirimwami, a guide at Kahuzi-Biega who has worked with gorillas for more than 25 years, was instrumental in answering questions presented by our staff. Cirimwami spoke to Nkuba staff about the dependence of infant gorillas on their parents, drawing comparisons to human relationships. Cirimwami also provided examples of silverbacks protecting their young, just as human fathers would do.

“Our staff was amazed to see how impressive and gentle Grauer’s gorillas are. Through this experience, they’ve become very proud to be the protector of these majestic animals,” said Caillaud.

A highlight of the visit to Chimanuka’s group was when a juvenile male gorilla named Karibu (which means “welcome” in Swahili) came within a few feet of our staff, made a friendly display and disappeared into the forest, seeming to invite them to come play. However, seeing some of the gorillas was a sobering realization of the debilitating impact of poaching and hunting—even in cases not intended to harm gorillas. Three individuals with missing hands because of snares set by poachers were seen, including solitary male Mugaruka. He will most likely remain solitary because his missing hand puts him at a disadvantage when competing with other males to acquire females for his own group. 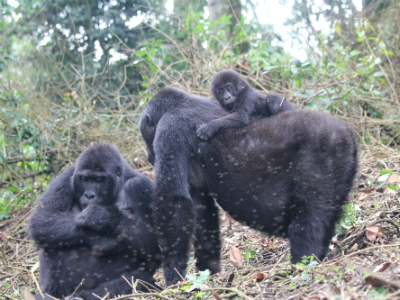 This visit was also an opportunity for our staff to meet in person with other Congolese conservationists and wildlife authorities and hear what they had to say. The staff at Kahuzi-Biega was able to help build the confidence and determination of our Nkuba trackers. Kahuzi-Biega National Park Director Radar Nishuli told them about the positive impact of protecting the forest on the animals and also on the communities living in the area. Nishuli encouraged them to talk to their community and tell them about what they have seen during their visit. Being able to see a sustainable and successful conservation program was a great illustration of the long-term benefits of working to save the gorillas.

In addition to the experience at Kahuzi-Biega, Fossey Fund Nkuba staff also traveled to the Lwiro Primate Sanctuary, which hosts more than 55 chimpanzee rescued from animal trafficking and more than 60 other primates, for a visit and for training about how to handle confiscated primates. Our staff saw various orphaned primates, including the young chimp named Mubi, which the Fossey Fund helped rescue in January. They were pleased to see how happy Mubi appeared, as he was adopted by a young female who was carrying him on her back. The Congolese staff of the sanctuary reminded them that places like the Lwiro sanctuary only exist because of poaching and live animal trafficking, and that their work in the forest is critical to prevent more animals needing to come to the sanctuary.

With this visit, our staff will be better equipped to become “ambassadors” for conservation in their communities, citing what they learned from Kahuzi-Biega staff and the gorillas that they saw. Many members of their communities are not aware of the repercussions of the bushmeat trade and do not know the benefits of conservation for both humans and wildlife.

In the future, the Fossey Fund hopes to organize more staff exchanges among our different field sites and to bring Kahuzi-Biega staff to our field site in Nkuba and the surrounding communities to continue to develop lasting relationships that will benefit the future of gorillas.

Look for more conservation collaboration stories from the Fossey Fund in the coming months!