The Fossey Fund’s successful conservation model for saving endangered gorillas, like the Grauer’s gorillas in eastern Congo, requires teams of dedicated, knowledgeable, strong and courageous trackers. Our trackers at the Karisoke Research Center in Rwanda, all local Rwandans, are a wonderful example of how daily protection can successfully work over the long term to save a species. 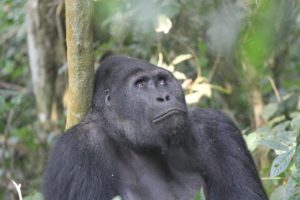 In the Democratic Republic of Congo, our gorilla tracking teams based at our Nkuba-Biruwe research conservation site are much newer, but they are already proving to be incredibly effective at playing the critical role in our efforts to save Grauer’s gorillas.

Unlike the mountain gorilla groups in Rwanda, the Grauer’s gorilla groups we protect and study in the low-altitude forests of eastern Congo are not habituated to the presence of human observers, and for their own safety, that’s how they should remain. So our trackers there follow only their trails, keeping a one-day distance behind them.

This makes the tracking even more difficult, as does the type of forest they live in. Mountain gorillas live in a forest with dense shrubs and herbaceous vegetation, where gorilla trails are fairly noticeable due to the disturbances in the vegetation. But the low-altitude Grauer’s gorillas live in a mature forest with a clear understory, and where the ground is covered with dead leaves, so signs of the gorillas are harder to find.

Nevertheless, our Congo trackers, all of whom come from nearby villages, have already become experts at following gorilla trails, only a few years after we formed these teams. Our tracking work in Congo is led by our Congo-based program director Urbain Ngobobo and our Grauer’s gorilla research director, Dr. Damien Caillaud. Dr. Caillaud established the tracking protocols, guides the data collection, and accompanies the teams when he is in Congo, but this work would be impossible without Ngobobo and Escobar Binyinyi, field research manager, who handle the complex logistics.

Camping in the forest

Currently, we have three Grauer’s tracker teams, each composed of five trackers. We are in the process of forming a fourth team at this time, which will be used to explore new areas for gorilla protection. The trackers all come from the local communities where we work, and most were recommended by traditional landowners and other local leaders.

Unlike at Karisoke, where our trackers mainly set out each day for tracking and return back to our base station before dark, our Grauer’s trackers work in the field for two weeks straight, camping every night in the forest. This is necessary because the few remaining Grauer’s gorillas are only found far away from human settlements (about 20 miles from the village where we are based, in this case). So that means when our trackers set out for the two weeks, they must carry everything needed for the whole time, including tents, equipment, rain gear, and food. 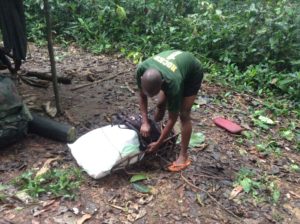 Food carried includes rice, sardines, salted fish, canned tomato sauce, and a common African food called “fufu.” In this region, fufu is a flour made from cassava roots, which is stirred in boiling water to create doughy sticky balls, to be eaten with sauce plus fish or meat.

We provide our trackers with backpacks to carry all of the equipment and food, but they prefer to carry things in a traditional way. This involves putting the backpack on a wooden basket called a “makako,” along with the tents and sauce pans, and carrying the makako on their backs.

Gorillas are a two-day hike away

Once the trackers set out, they hike for about two days to reach the area where the Grauer’s gorilla groups we track are located. The teams know precisely where to meet up, because the outgoing team will have sent text messages using a satellite phone to show their last camp location.

The incoming team hikes into the forest, meets the previous team, exchanges information about the gorillas’ locations, and transfers the satellite phone. The outgoing team then hikes back to our field station in the village. With less to carry going back, the return hike usually only takes about nine hours.

The next day, the incoming team starts their regular routine, walking five to eight hours, collecting data on the gorillas and the habitat. They follow the trail of the gorillas, noting what the gorillas have eaten on the way by locating food remains, and noting evidence of other gorilla activities.

The trackers also take photos of various plants if unknown or not documented, and collect some gorilla fecal samples for further genetic analyses to help verify the identity of the groups that are being followed.

Hiking for the day stops when the team finds the most recent gorilla nest site (used by the gorillas the previous night— gorillas make new nests in new areas every night). These Grauer’s groups walk about 1.5 kilometers per day, three times the distance walked by mountain gorillas.

After some months of training, the trackers are now experts at following the gorillas’ trail. If they temporarily lose the track, they use walkie-talkies, GPS, and compasses to spread out and regain the trail, and they always succeed. Our Grauer’s gorilla trackers come from different backgrounds. Some were hunters, miners or living off the land, in an area that has faced 20 years of conflict, with millions of people dying, and where there is extreme poverty, lack of food, and few if any basic services, like electricity. There are almost no traditional “jobs” as well, and no banking system for money.

So although our trackers get paid in money, they generally use a traditional system to save and “invest” the money for their futures. This involves giving much of their monthly salaries, on a rotating basis, to just one person on the team, so that that person can do something important with it, such as build a tin roof for his house, pay school fees for his children, or start a fish farm. 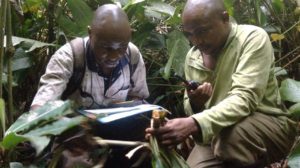 Tracker Jadot has been with our tracking team for four years now, and comes from the family who has traditional ownership of the land where we follow the gorillas. He is especially knowledgeable about the plants in the forest and is a very skilled tracker. Another member of his family, named Imani, also works with our teams.

Team leader Wasso comes from a different village, 60 kilometers away from our station. He moved to Walikale and rents a house there for his family. He also studies at a local university (Institut Supérieur de Développement Rural ) and requested Dr. Caillaud to lecture there on conservation and ecology, which he began this year and will continue in the future.

Trackers Are the Community

“The exceptional dedication of our trackers to their work is explained by two factors: first, the forest is truly their forest, owned by their families for many generations; second, we make sure they are involved in the planning of all our activities. We need and value their input and consider them as partners more than as employees,” says Dr. Caillaud.

Indeed, working entirely with local communities is a key factor in the success of conservation, especially in this area that has suffered so much. Due to the amazing work of these gorilla trackers, communities can see that the forest ecosystems can be restored and benefit everyone. There have been no reports of gorilla deaths by local community members where we work since the programs started. Traditional landowners are working to reduce or prevent hunting on their lands, and some wildlife, such as monkeys, which were rarely seen before, are now seen on a regular basis.

As we expand our programs, we look forward to working with more communities to ensure that more gorillas, and all the biodiversity that shares their habitat, are protected. The success of these Grauer’s gorilla trackers is helping to save not only gorillas but whole communities. 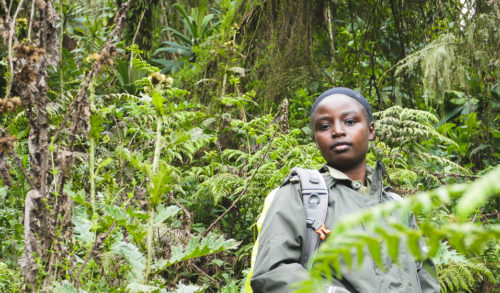 The Dian Fossey Gorilla Fund has a large team of trackers, anti-poachers and scientists protecting and studying the mountain gorillas... 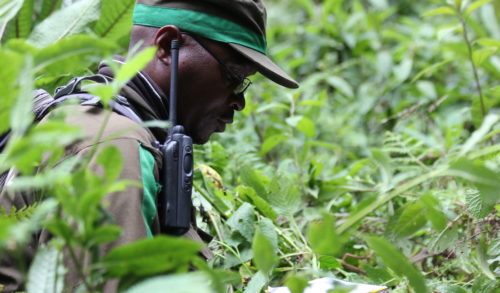 The Dian Fossey Gorilla Fund has nearly 70 mountain gorilla trackers in Rwanda, as well as anti-poachers, research assistants, and...