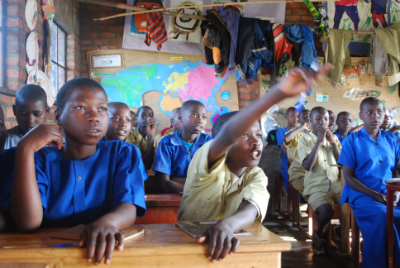 There is nothing more rewarding for a teacher than to see how students improve knowledge as a result of the classes they take – even more so if results show an advance from one year to the next.

In four schools near Volcanoes National Park in Rwanda, Joseph Karama – Karisoke’s Education Program Manager – recently finished delivering the second edition of the Conservation Education Program. Designed by Disney, sponsored by the Columbus Zoo’s Partners in Conservation and implemented by the Fossey Fund, the program reaches over 1,600 students in the third and fifth primary grades, through a creative, dynamic curriculum. Over the course of eight weeks, the 11 and 12 year-olds learn about nature, wildlife, and their own role in caring for the environment. The best 20 students from each school then participate in a special field trip near the park.

“This is the best way for them to directly connect with nature and make actual observations,” says Karama. “It is also an important exercise for me, in order to better assess their knowledge and adapt the course accordingly.” 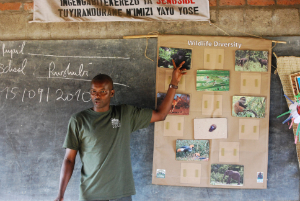 In this class, the young students identify animals and plants living in the forest, as well as threats posed by humans living nearby. When asked whether they have ever been in the park before, they first deny it vigorously – knowing that they are not supposed to go there – but then one by one they start putting their hands up: some entered the park for water, others for wood, others to collect certain plants.

“Of course it is tempting for children, because it is a forbidden territory,” says Karama. “Eventually, when we talk it out, they understand why they should not do so, and instead take actions to protect the park, such as planting trees, or not catching butterflies and birds.”

Tests show the program is working

Compared to 2009, when children in this region were exposed to this type of course for the first time, Karama notices a significant improvement in the students’ pre-existing knowledge, which he attributes to the fact that children discuss what they learn in class outside of school as well.

Statistics show that 82 percent of the third grade students correctly identified the needs animals have in order to survive, as well as what they themselves could do to protect the animals. At the end of the class, the correct answers to both these questions rose to an impressive 95 percent. Progress was also recorded on a seemingly more difficult question for the children: “Whose responsibility is it to protect the animals?” In the pre-evaluation, only about half of them got the answer right, but following participation in the program, 78 percent of the students provided correct answers.

In fifth grade, knowledge of wild animals is very high, with 96 percent of the students answering a question about them correctly both in pre- and post-evaluation. The most challenging question was the one addressing “environmental problems,” with only half of the class giving good answers following the course. It is interesting to see the four comments students gave most often about the value of the forest: 1. brings us money; 2. home to animals; 3. attracts tourists; 4. gives rain and good air.

Overall, Karama was pleasantly surprised to see that this year more new students could identify the animals found in Volcanoes National Park (and did not talk about zebras and lions anymore), had a more developed English vocabulary (they were aware of rarer animal names, such as “bushbuck” and “duiker”), were better informed about the threats to wildlife, and also volunteered more answers overall. 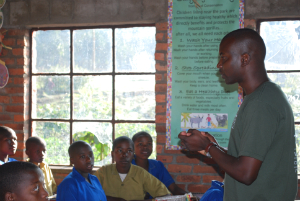 In addition to using attractive teaching materials and playing games with the students, Karama also tells stories that capture children’s imagination. In particular, he addresses the sensitive issue of wildlife occasionally coming out of the park and crop-raiding by recounting how back in the day the cultivated land was still part of the forest – and that animals today, using their long-lasting memory, simply try to return to their old homes.

“This evokes sympathy,” says Karama. “Hopefully, the next time when they see a gorilla or a golden monkey outside the park, they will not throw stones and attempt to hassle the animals.”

Building on the good feedback he has received for this program from both the schools involved and the local community, Karama intends to expand it further next year. It will be vital to evaluate behavior changes in the communities where these children come from: whether people will report less dependency on the forest for firewood, bamboo or water, and whether fewer snares will be set in the areas of the park near their communities. 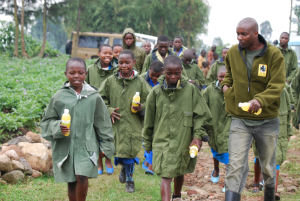 In the meantime, he is happy to see the children plant trees and show an increased compassion for animals. For instance, various teachers say how students now tell on those who tamper with birds' nests.

In addition to the Conservation Education program, this month Karama will also start a new “ Citizen Science” initiative in six secondary schools in the region. Sponsored by Nature’s Path, this program will teach students how to collect basic data from the field, including observations of birds and plant pollinator interactions. The data will then be analyzed, shared with the students, and the results published.