Since mountain gorillas are critically endangered, it is important to keep track of their numbers and determine whether the population is stable. Mountain gorillas live in two areas, with a total of about 880 individuals at last count. About 480 of them live in the Virunga mountains, which straddle the countries of Rwanda, Uganda and the Democratic Republic of Congo. The Dian Fossey Gorilla Fund provides daily protection and monitoring of about half of the mountain gorillas in the Rwanda section of the Virungas, or about 115-120 gorillas. 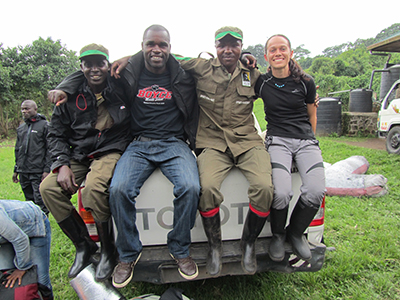 The last census, or counting, of the gorillas took place in 2010 and a new census has been underway since October 2015. This time, the census effort includes two complete sweeps. This means that 12 teams, consisting of five to six participants each, camp out and comb the forest twice, on predetermined routes, searching for gorilla night nests (which are made fresh by the gorillas each night and used only one time), collecting and preserving gorilla fecal samples, and recording other information. This method, called “mark-recapture,” is designed to provide the most accurate results, in case any nests are missed on the first sweep. The fecal samples are then analyzed to determine each unique individual’s gender and lineage.

A number of Karisoke staff have been involved in both sweeps of the current census, including Dr. Winnie Eckardt, Fossey Fund research manager at Karisoke, who served as an instructor during the training process and spent several days in the field with the teams as they started the process each time. Also included were some of our best trackers and, in the first sweep, several research assistants. This spring, Dr. Eckardt started off on the Congo side of the Virungas, which covers the largest forest area and is home to the majority of unhabituated gorillas (whereas most of the gorillas groups in Rwanda are habituated to the presence of human observers, such as the Fossey Fund tracker teams).

Here are some impressions from Dr. Eckardt:

“After 10 years working with the Virunga mountain gorillas, this was my first time going into the park on the Congo side, which felt like adding a whole new chapter to my experience and knowledge of this population and their habitat. I embraced the opportunity, spending two days with some of the best field staff from ICCN (the Congolese wildlife authorities/Institute Congolais pour la Conservation de la Nature), along with staff from the other two countries, and getting a crash course in gorilla and forest life on the Congo side.

“Unlike Rwanda, the forest in Congo still has extended areas that are dominated by mixed forest, a vegetation zone that was almost completely converted to agriculture on the Rwandan side. Thus, many of the gorillas’ food plants, in this mixed forest, are different, such as the wild banana, with gorillas eating parts of the large leaves. Even the smell of the forest is different. But mixed forest also means being on high alert for ant attacks! At night this means closing the tents up tight in case of ants swarming through the camp! 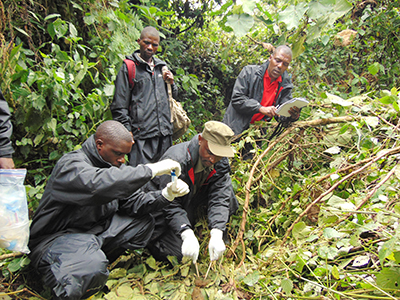 “The first day in the field is the most exhausting, because all the camping and census equipment has to be transported and distributed. At least 50 porters had to be hired from nearby villages, many of them women, and each carries up to 25 kg to the forest camp, which can be up to a three-hour hike. The women clearly enjoyed competing with the men to show they are just as capable, and we often heard them saying to each other “iyambere,” which means “first,” while running toward the front of the caravan. This reminded me of photos from Dian Fossey’s time, when the Karisoke Research Center was still located deep in the forest and supplies had to be transported to the research site regularly.

“As during the first sweep, it is very encouraging to see how strongly the team members bond, despite different nationalities, education, languages and customs. They grow into a strong unit, ready for the challenged involved during weeks of hard census work and forest life. They get to know each other’s strengths and weaknesses and tie those into their work as a team to make it work optimally. The team members are eager to learn from each other and there is a great willingness to share skills and knowledge, as it makes the team stronger.

“And one cannot forget the camp cooks, who serve a key role and sort of function as camp “parents,” making sure the camp is functioning, food is prepared in time each morning and evening, collecting and boiling water, maintaining forest pits and more.

“Our first few days were very productive, even in the heavy rainy season, finding nests, a well-known habituated solitary male gorilla (Mukunda), some snares, and even signs of elephants.”

This second sweep of the mountain gorilla census will be completed in June, but analysis of the samples is expected to continue throughout the year, with final results available in 2017.