Tammie Bettinger, Ph.D., a senior research biologist for Disney’s Animal Programs, along with other Disney team members, has been working side by side with the Dian Fossey Gorilla Fund to build the Gorilla Rehabilitation and Conservation Education (GRACE) center in Congo, in a unique example of a hands-on collaboration. 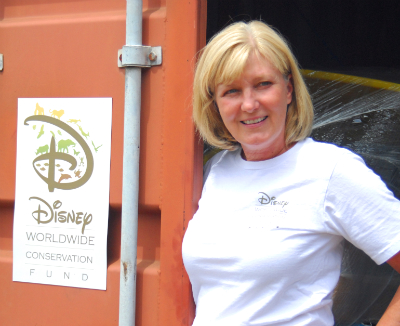 Several years ago, the Congolese wildlife authorities (ICCN) had requested the help of the Fossey Fund in caring for the increasing number of infant gorillas that were being confiscated from poachers. Bettinger played a critical role from the beginning, when she helped her friend — the late Alecia Lilly, Ph.D., who was then the Fossey Fund’s vice president for Africa programs — to apply for a grant from the U.S. Fish and Wildlife Service to build the center. Since then, she and the other team members from Disney have been personally involved in every aspect of the project, from welding cages to community involvement and gorilla management.

Recently Bettinger made her seventh trip to the rural village of Kasugho in eastern Democratic Republic of Congo, where the local community had donated land for GRACE and the Tayna Center for Conservation Biology (a unique local conservation college funded and created with support from the Fossey Fund and Conservation International). In addition to recruiting key staff and locating building materials, Bettinger has also found time to help the Kasugho widows’ organization develop their rabbit breeding project, and to help local teachers and college students conduct conservation education at the Muyisa primary school for orphans.

This March, Bettinger and three other team members from Disney’s Animal Programs journeyed to GRACE to work with the younger rescued gorillas already in residence and to help build the accommodations for six older gorillas expected to arrive soon from Rwanda. Bettinger brought with her basketballs, children’s books, school supplies and medical equipment. She also brings to GRACE many years of experience working with animals in zoos and in Africa, and in what she calls “the people side of conservation.” She has seen other facilities across Africa that received rescued animals, and understands the important role they fill in the fight against illegal trafficking of gorillas.

“Law enforcement faces enormous challenges in confiscating animals from poachers if there’s no place to provide professional care and protection.” she says. “There was no place for rescued gorillas in eastern Africa when GRACE was launched, so this was a timely project when the Congo was trying to strengthen their wildlife protection laws.”
Bettinger sees special significance in GRACE’s roots in the community. “We love the Fossey Fund slogan ‘Helping people. Saving gorillas.’ It’s what we believe for our own conservation programs as well. The people living around the Tayna Reserve are ultimately the ones who will have to save the gorillas.”

Disney partner Club Penguin, a social network for children, donated $55,000 to improve the Fossey Fund-supported Muyisa and Bingi schools at the same time that GRACE was being built. In 2009 Disney sent 18,000 pounds of building materials, animal care equipment, medical supplies, and books and materials for the local school.

“For us, there are two parts to every conservation project,” says Bettinger, “and it’s important to do just as much for the community as we do for the animals. A veterinary hospital sent a truck from Oregon to Florida collecting supplies for us, and a hospital in Orlando also donated materials, for the neighbors’ medical clinic first. It took six months to arrive in the Congo.” 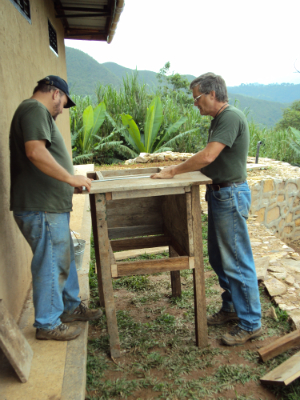 At a critical time in 2009, after Dr. Lilly died and GRACE’s construction was stalled, Bettinger and others from Disney, including Joe Christman and Sam Berner, arrived. They helped select construction materials, hire staff, and design the night house cages. Christman and Berner spent six weeks with the construction team in the spring of 2010 welding the cages together so they can contain the maturing gorillas that are much stronger than humans. The managers returned in March 2011 for finishing touches on the buildings and work on the electric fence. It wasn’t easy, as the road to GRACE is long, steep and often very muddy.
Christman is the animal operations manager for Disney’s Animal Kingdom’s Kilimanjaro Safari and has also worked with animals in Africa. Berner is an assistant animal operations manager. The March trip to GRACE was Christman’s fifth; he was in the first meetings with local people to pick a site. “What I enjoy most is that it’s a community-driven project,” he says. “The people in Kasugho said we want to help, we want to use our home to build a facility for gorillas. The masons were local, and the people who cleared the site and donated the land, and local people are still working there. It’s helping others do a project in their own home.” In addition to construction jobs, community members have been hired to work on staff at GRACE.

Barb Weber, zoological manager of primates at Disney’s Animal Kingdom, also worked at GRACE in March, helping to integrate Kyasa, the littlest and newest orphan gorilla, with the others. “The oldest female, Mapendo, is only six years old and is just learning mothering skills,” says Weber. “In the future she may bring up the youngest ones, enabling the younger gorillas to spend less time with their human caregivers. A gorilla learns how to be a gorilla much more quickly from another gorilla, no one can do it better, and it’s important they know they’re a gorilla, not a person. They also need to learn to be gentle with the littler ones. But they have no mothers and siblings.” 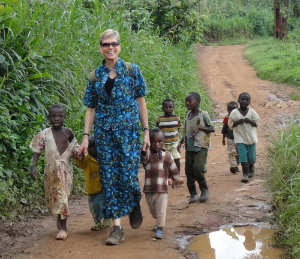 Most of Weber’s own experience was with zoo gorillas, so to work with these young gorillas was one of her life-long dreams. “GRACE’s importance is tremendous,” according to Weber. “Eventually, our goal is to release them back to the wild, which will be a significant contribution to gorilla conservation. In the meantime, they will receive excellent care, form a normal social group and live healthy, happy lives.”
The Disney Worldwide Conservation Fund is providing funding for operating expenses for the facility and Disney is a founding partner of GRACE, along with the Fossey Fund.

“Disney’s Animal Programs and the Disney Worldwide Conservation Fund are committed to the welfare of animals and the conservation of wildlife and wild places around the globe,” said Jackie Ogden, Ph.D., vice president of Disney’s Animal Programs and Environmental Initiatives and a member of the Fossey Fund board. “We know that this initiative to create a safe place to rehabilitate and eventually reintroduce orphaned gorillas will improve the welfare of these animals and contribute to the numbers of Grauer’s gorillas in the wild, while also helping the local communities in the Democratic Republic of Congo, by assisting the area’s economic sustainability and providing opportunities for employment and training.”