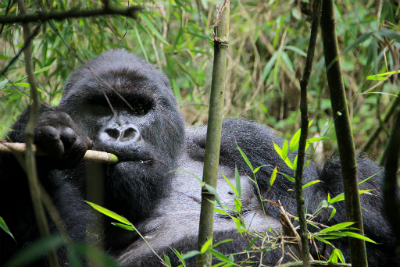 The Dian Fossey Gorilla Fund is deeply saddened to report that our trackers found dominant mountain gorilla silverback Rano dead on the morning of July 28, 2014. A necropsy by Gorilla Doctors showed that Rano suffered a perforation of the small intestine and acute peritonitis. A high load of intestinal parasites was also observed. This is the second dominant silverback in the last 18 months found to have very high parasite loads upon necropsy, and it highlights the importance of understanding what role parasites play in gorilla health and mortality. Rano (full name “Umushikirano”) was 21 years old and the son of legendary silverback Titus.

We are now closely observing how the remainder of Rano’s group deals with his loss. There are three young silverbacks in the group: Turakora (who is almost 16 years old), Pato (who is 14) and Urwibutso (who is 13). If one of them is able to take over the leadership of the group, that could provide a relatively smooth transition, although as the males determine who will be dominant, aggression is likely. However, given the young ages of the remaining silverbacks, the group is very vulnerable to take- over attempts from lone silverbacks or neighboring groups. If an outside male were to become dominant, it is very likely that the two youngest group members, both of whom are still nursing, would become victims of infanticide by the outside male.

Interestingly, the three young silverbacks in Rano’s group were also fathered by the late Titus, though they have different mothers. Also in the group are three adult females, one young male (blackback), one immature male, and an infant born this spring. The two youngest in his group were born since Rano became dominant so we assume they are both his sons, but confirmation depends on DNA analysis, since there are other silverbacks in the group who are sexually active.

Rano was born in Beetsme’s group (then led by Titus) in August 1992. In 2006 he left the group and became solitary. In 2007 he tried twice to form a group of his own by taking females from Titus’ group. The first time was in April 2007 when he obtained his sister Mawingu and another female (Makuba), but after a month with him they both transferred to a wild group in DR Congo, leaving Rano alone again. He tried again to form a group in June 2007 by acquiring elderly female Papoose (who was the oldest female we have ever monitored), but she died and we found him alone once more. After two more years alone, Rano rejoined Titus’ group in 2009, this time for good.

Following a dramatic sequence of events, Titus died on Sept. 14 of that year, just a few weeks after Rano came back. Rano took over, gradually regained a peaceful routine and was successfully leading a growing group. Three females joined him and two infants were born, including one this spring.

On the maternal side, Rano’s mother was an interesting individual named Fuddle, who died when Rano was 10 years old. Fuddle was known to Dian Fossey and researchers from that time for her ornery temper and for being difficult to observe because she would hide in thick vegetation. Rano has a living sister, Taraja, who lives in a different, recently formed group. He may also have a brother still living – Jolie Ami – who became a lone silverback in 2003 and was last seen in 2010 during the mountain gorilla census. 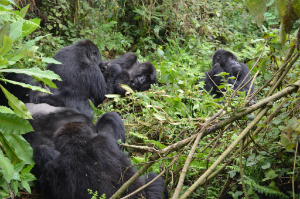 The death of a dominant silverback like Rano is always a very dramatic event for the remaining group and the outcome is unpredictable. Fossey Fund trackers and researchers will be observing closely to see what happens. The day after his death, the group was ranging not far away from where his body was found, and its members were exhibiting normal behaviors. It is interesting that the group has not yet re-visited the site where Rano was found dead. This is unlike what happened following the deaths of dominant silverbacks Titus, Shinda and Urugamba, whose bodies were visited several times by group members. Since Rano had left the group a couple of times briefly in the last year, perhaps the group is still calmly waiting for him to return. Therefore, the upcoming days will prove to be extremely interesting and important.

Read more about the death of legendary silverback Titus, father of Rano: gorillafund.org/news_090914_death-of-silverback-Titus