Anny Kahindo Muyisa, M.D., coordinator of DFGFI’s Ecosystem Health and Community Development Program in the Democratic Republic of Congo, says she became a doctor because she was fed up that large numbers of people were left to suffer in silence, since the local hospital system where she lived just could not care for them. One of those people was her own mother.

Growing up, Dr. Muyisa remembers how her mother was often sick or suffering from complications related to childbirth, but could not get adequate healthcare. Dr. Muyisa’s own experience with the local hospital was one of frustration. At age 12, she developed sudden problems with her eyesight. Even though she arrived at the hospital early one morning and waited until the sun had set, she was skipped on the list and never treated. She swore to herself that if she became a doctor she would fix the system.

When Dr. Muyisa started her university studies, her parents were lucky enough to be able to help her pay the initial fees. However, their funds quickly ran out. With what money she had left, she bought some baby pigs for about $10 each. Before, after, and between classes, she took care of her pigs. Soon she was making enough money from selling pigs to pay for her studies.

After graduating, she began working at a local hospital and soon she met and fell in love with Pierre Kakule Vwirasihikya, a leading Congolese conservationist and now coordinator of the Tayna Center for Conservation Biology. After their marriage she moved to Goma with Pierre and found a job at the Goma Provincial Hospital in Congo. In 2003, she began working for DFGFI. 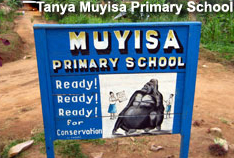 In her current position, Dr. Muyisa is responsible for many projects, such as an orphanage that helps children who are victims of war, and a program that trains widows to raise pigs just as she herself had done. She also coordinates a program that ensures that communities around the reserves are getting enough protein nutrition. The families are given goats, pigs, sheep, chickens, or ducks to raise. In turn, as the animals multiply, their owners give some to other families within their association. Dr. Muyisa also oversees the management of the Tayna Muyisa Primary School, which she and her husband helped to create and DFGFI helps to support. In addition to working, she takes care of seven children, five of whom were born to her husband’s late wife.

Despite the enormous amount of responsibility she has for all those programs and her family, “Dr. Anny,” as she is known, is very satisfied with her job. “It is a pleasure for me to be a part of DFGFI. I can be a doctor and take care of many parts of the community,” she says. “Everyone has a place in the picture of conservation.”