Following the unusual trend of 2007, in which we observed 20 female gorilla transfers from one group to another, this year started with another change. 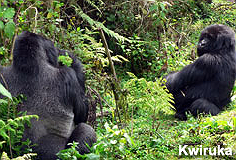 On Jan. 7, the Karisoke Research Center field staff was amazed to find that Kwiruka, a 31- year-old female, had moved into Bwenge’s group, which was formed in 2007. Kwiruka had lived in Shinda’s group since 1993, when an older group (called Group 5) split into Shinda’s group (including Kwiruka) and Pablo’s groups. Kwiruka held a very high position in the group, and that makes her decision to leave the group really unclear. In moving to Bwenge’s group, she left behind numerous offspring in Shinda’s group, including three silverbacks, an adult female and a 4-year-old daughter, Ubufatanye.

Kwiruka is a very interesting gorilla. Despite the habituation of the group and her long experience with human observers, she has never liked human proximity. But Karisoke staff monitor her carefully, and she had gained our greatest respect, since she charges and chases everybody who comes too close, using loud “pig grunts.” Her name reflects this personality, which has been observed since she was a youngster. In Kinyarwanda, her name means “running” and it was given to Kwiruka because she so frequently ran away from human observers.

Kwiruka has a strong temperament, even among gorillas. In Shinda’s group, she was respected by all members and in her new group she is trying to gain respect from all the females. But Maggie, who is the dominant female of Bwenge’s group, isn’t offering much confidence to the new rival and often performs some aggressive behaviors in order to make the hierarchy very clear. 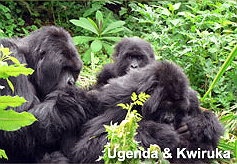 Bwenge, as the only male of his group, is very close to the new arrival and he is constantly moving behind her. Kwiruka seems to enjoy all the attention that Bwenge is giving her and she remains at his side even when he shows her all his strength with powerful displays.

Back in Shinda’s group, the gorillas are not indifferent to the loss of Kwiruka. The silverback who is second in charge — Ugenda — was particularly attached to Kwiruka and for the entire week after her transfer he made calling vocalizations and loud displays to try and get her back in the group. Even Kwiruka’s 8-year-old daughter, Imvune cried a lot upon the absence of her mother. The little Ubufatanye, normally very playful, seems to have lost her playfulness and is spending her days in close proximity to silverback Ugenda.

Karisoke researchers are monitoring all the interesting social behaviors that are resulting from this recent transfer, so stay tuned for more details in upcoming months.