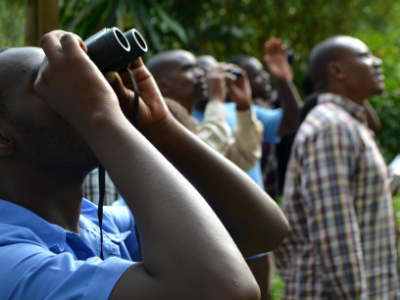 The Fossey Fund’s environmental education activities are diverse and designed to reach students of different age groups, helping to build awareness, assist local educational institutions, and provide further training for those already working in conservation. Every year, we work with local communities and primary and secondary schools near Volcanoes National Park, as well as with biology students from the University of Rwanda (UR). So far this year we have engaged a large number of students in a variety of ways, including the following programs.

This program, funded by our supporter Nature’s Path, began in 2010 and targets secondary school teachers and students (who are members of local environmental clubs) from schools near the national park, by providing training on environmental topics. Nature’s Path, through its EnviroKidz products, has been one of the longest-term supporters of the Fossey Fund’s educational effort. EnviroKidz products empower positive change through organic food and through the 1% for the Planet program, they donate 1% of gross annual sales to sustainably minded nonprofits. EnviroKidz believes kids can help save the world and works to support endangered species, habitat conservation and environmental education for children worldwide.

Nine schools participated in the program this February, with each school represented by one teacher and two students. The training this year focused on monitoring migratory butterflies and bird species, and recording climate-change data in the school garden and surrounding crop yards. The training also included lectures on bird and butterfly research. Evaluations conducted at the end of training showed a very high success rate in terms of learning.

The aim of this training is to provide knowledge and skills to the teachers and students that will enable them to carry out small research projects at their own schools. The Fossey Fund will visit each club once a semester to evaluate the progress and see how many students are reached.

At the end of 2014, the Fossey Fund, along with funding from Partners in Conservation (PIC) from the Columbus Zoo, completed the building of a library based at the Bisate Primary School. The library was named the Bisate Learning Center. In January 2015, 36 computers were installed in the learning center, and for the first time in their lives, young students at the school will have access to computers and books at their own school. The Bisate Learning Center will also be available to the entire community. Starting in March 2015, the Fossey Fund began offering IT classes and seminars at the learning center.

In February, eight University of Rwanda students (four botany majors and four in zoology) who carried out their field projects at the Karisoke Research Center in 2014 came back to present their research to Fossey Fund staff and partners from Cleveland Metroparks Zoo, who funded the projects. During the presentations, comments and recommendations were given to each student to help improve their projects. 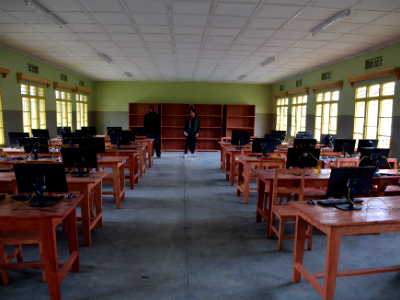 In February, 72 third-year students from UR were trained in field research methods. This long-running field course designed by the Fossey Fund aims to provide the students with knowledge and skills in scientific methodology. The first group included 42 students majoring in botany and the second included 30 zoology students. The training included lectures about gorilla research, vegetation surveys, species identification, and park interaction. Each group had three field visits in different sites within Volcanoes National Park. Kristen Lukas, Ph.D., and Austin Leeds of Cleveland Metroparks Zoo contributed to the training and lectures.

This program is designed to introduce second-year biology students from UR to mountain gorilla conservation and research. In March and April, 147 students divided into five groups are participating in this program, co-delivered by the Fossey Fund and Rwanda Development Board (RDB) staff. The program introduces students to the history of mountain gorilla research at Karisoke, anti-poaching activities, community participation in conservation, and biodiversity research in Volcanoes National Park. The students are also shown films and documentaries pertaining to conservation and attend field trips, including climbing the Visoke volcano and visiting the mountain gorillas. For many of the students, this is their first experience in the forest. Both the second- and third-year UR student programs are funded by Orange County Community Foundation.

After a good start to the year, the Fossey Fund’s environmental education programs will continue with other important activities, with the objective of wider community outreach. One of these activities will see 48 local leaders from 12 district sectors adjacent to the national park visit gorillas. These leaders include authorities from the district, religious leaders, and school head masters. The goal is to introduce them to gorilla conservation and park management to help reinforce the importance of the relationship between the community and the park. Local leaders also play a crucial role in anti-poaching and are important players in the detection of illegal activities, which benefits gorilla conservation.