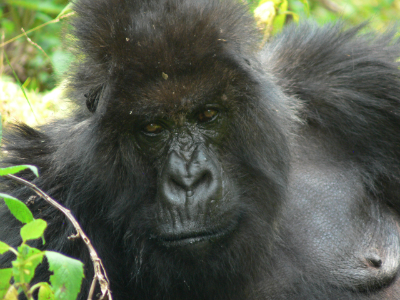 Female mountain gorilla Tuck is the oldest female among the research gorillas monitored by the Karisoke™ Research Center. On Aug. 16, our trackers observed that she was in extremely weak condition and moving slowly, still feeding but seemingly without much strength. Tuck had always been a large female, but in the last few weeks she has lost a lot of weight, and her walking posture suggests pain in her hands.

Tuck’s last offspring, Segasira, a juvenile male, has been at his mother’s side since that day. He cuddles Tuck with long grooming sessions and they share a night nest as they used to do when he was an infant. Even blackback Urugwiro, Tuck’s other son in the group, spends time with her and his young brother, showing concern about their mother’s weakness. Also, the group, led by silverback Rano, is not traveling long distances, which allows Tuck to keep up with them. 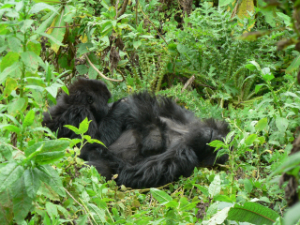 Karisoke field staff are monitoring Tuck’s progress daily. Veterinarians from the Mountain Gorilla Veterinary Project have observed her, and confirm that her weakness is due to old age and lack of proper feeding.

Karisoke Deputy Director Felix Ndagijimana says: “’It is sad to see such a powerful female becoming old. She is visibly in pain, and moves using her wrists instead of her hands.”

Tuck is one of the last gorillas of the Dian Fossey generation and is extensively mentioned in Fossey’s book Gorillas in the Mist. She was born in Group 5 in 1972, to mother Effie. As with many gorillas of her family, she easily gained a top rank among females when she transferred to Beetsme’s group in 1988. She became the favorite female of silverback Titus, the leader of Beetsme’s group. Titus and Tuck stayed together until his death in September 2009. Following Titus’ death, Tuck left the group, avoiding the new leader Rano, but after many days travelling alone she eventually rejoined the group. She was with them as of this writing, resting in contact with various members.