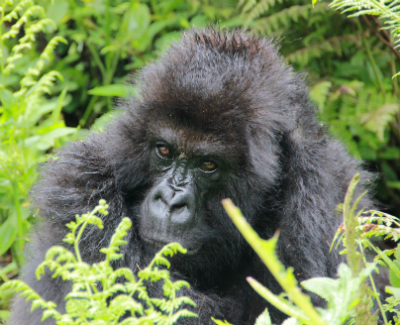 At 33 years old, Maggie is the oldest female monitored by the Dian Fossey Gorilla Fund’s Karisoke Research Center. She is second in age only to Cantsbee, her nephew, who remains the dominant silverback in Pablo’s group at the age of 35!

For a couple of years, field staff have watched Maggie’s physical appearance decline from the large and strong female she was in her prime. These days she has seemed to lose both weight and some of her thick hair. In October, trackers could see that Maggie was in pain while feeding. The source of the pain was identified as multiple infections in her jawbone.

Fossey Fund staff and Gorilla Doctors collaborated to monitor the day-to-day developments of the infection and Maggie’s general condition. Fortunately, she appears to be recovering from the stress and discomfort on her own, which is quite a relief to all of the field staff who have been monitoring her over the years.

Given that Maggie is approaching the age of 35, which is the current estimated life expectancy for wild gorillas, we are not surprised to see certain changes in her. But despite her more vulnerable appearance, Maggie maintains the dignity and social power which she has gained over the years. In early 2007, Maggie transferred from her natal group, Pablo’s group, to Bwenge’s group. She soon became dominant among the females and is regularly at Bwenge’s side to help protect the group. Veronica Vecellio, Gorilla Program Manager at the Karisoke Research Center, says, “For all of these reasons, and also for her distinctive sociable attitude with human beings, Maggie has gained the special affections of all the field staff, and they were very concerned about her recent health issues.” In addition to being beloved by field staff, Maggie is also a favorite gorilla of Sigourney Weaver, who spent many days with her in the forest while shooting Gorillas in the Mist.

Aside from being well-loved by many, Maggie is also a very important contributor to the world’s understanding of mountain gorillas. She has been followed since her birth on June 15, 1980, and was given her name by Dian Fossey herself. Records of her growth, behavior, development, transfers between groups and offspring all enrich the long-term records maintained by the Fossey Fund since Fossey established Karisoke in 1967.

Maggie's youngest son, Gasore, benefits from the wonderful care of his mother, who — despite the pain caused by her abscess — never missed an opportunity to groom him with the same care and devotion as usual. Gasore and his siblings will carry forward Maggie’s legacy into the next generation of mountain gorillas monitored by the Fossey Fund.