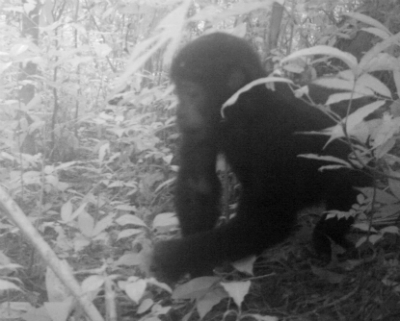 In the past two years, the Dian Fossey Gorilla Fund has expanded its program to study and protect the little-known Grauer’s gorillas (also known as eastern lowland gorillas), which live in eastern Democratic Republic of Congo. They are a different subspecies than the mountain gorillas we have protected in Rwanda for more than 45 years, and, due to more than 15 years of civil unrest in DR Congo, not much is known about their current status.

The Fossey Fund has set up a permanent base camp in the forest between Kahuzi-Biega National Park and Maiko National Park, from which to launch surveys of areas that are thought likely to hold groups of Grauer’s gorillas. But these areas are extremely remote places and require days of hiking and camping just to reach, in addition to many days spent collecting information and looking for gorillas and other important species. 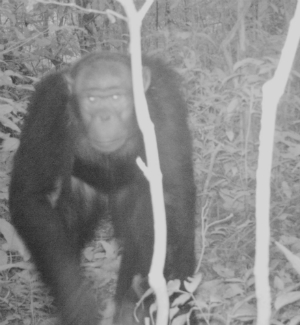 Estimates about the groups’ composition, such as numbers of silverbacks, females, juveniles and so forth, have been based only on indirect signs such as footprints, dung, and night nests. Our team was also able to make some preliminary maps of the territory, showing the likely presence and distribution of gorillas (and other species, as well as human activities such as hunting and mining).

“We estimate the Grauer’s gorilla density in our study area to be five to 10 times lower than the density of mountain gorillas in the Virungas,” says Caillaud. “This explains why direct sightings are so rare. The very low density is explained by the dramatic increase in bushmeat hunting observed in the region since the late 1990s.”

Recently, a grant from the Margot Marsh Biodiversity Foundation allowed the Fossey Fund to obtain 12 camera “traps” to place in the forest. These cameras, which are placed strategically at the base of trees along animal trails, operate automatically and silently and record animals in motion as they pass by. Based on the recent survey work in the area, field staff were able to place these cameras in locations they felt would be most likely to show gorillas at some point.

And indeed, this month, when the cameras’ drives were retrieved for downloading by Escobar Binyinyi, the program’s field coordinator, Fossey staff were elated to find that photos of Grauer’s gorillas were present! One of the cameras took five photos of a group of Grauer’s gorillas. Other species such as chimpanzees, duikers, bushpigs, golden cats and mongooses were also captured by the cameras.

Caillaud believes that these may be among the first-ever photos of low-altitude Grauer’s gorillas in their habitat. Seeing them on camera is highly significant because “it puts faces on these cryptic gorillas we’ve been trying to protect for so long,” he says. “Most people in nearby villages have never seen gorillas. Being able to show them the gorillas that live in their forest will considerably help sensitize communities to the necessity of protecting the gorillas.” 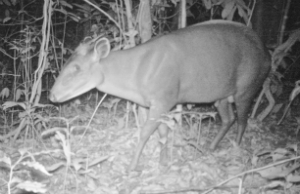 The next goal of the Fossey Fund’s Grauer’s program is to begin following specific focal gorilla groups (from a distance, since they are not used to human presence) in order to start learning more about their ranging habits, diet and other crucial behaviors. “Field research on Grauer’s gorillas is urgently needed to better inform conservation policies. If we do not improve the protection of this rare subspecies, the gorillas seen in these photos will soon disappear,” says Caillaud.

The Fossey Fund’s Grauer’s Gorilla Research and Conservation Program was initiated in 2011 with the support of a $1 million commitment from Ted Turner and subsequent additional support from the Daniel K. Thorne foundation and from an anonymous foundation, to help stop the rapid decline of the endangered Grauer’s gorilla through extreme conservation methods pioneered by the Dian Fossey Gorilla Fund International.