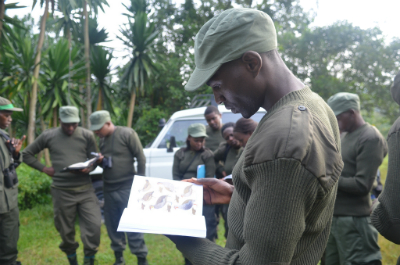 Emmanuel Harerimana, a tour guide in Volcanoes National Park and a grassroots conservationist in his own right, talked to the Dian Fossey Gorilla Fund about rejecting a life of poaching to become a park guide, and the role the Fossey Fund’s Conservation Education Program played in supporting his journey.

Harerimana was born in Kinigi, a town close to the border of the park. As a child, he said that he would see tourists on their way up the road to the park headquarters of the Rwanda Development Board (RDB), where the tourists gathered before trekking up to see the gorillas. He always wished that he could one day work in the park with the tourists. At that time, however, his family’s livelihood seemed in opposition to the aims of the local park authorities and conservation organizations.

“I used to be a poacher,” Harerimana says. “Even my school fees used to come from poaching…. We used to go [into the park] to look for food for our families because we were very poor.” Harerimana describes how his father hunted duikers, antelopes, and bushbucks to feed his family and to save up the money he would need to send Harerimana to school. Harerimana’s childhood experiences give him an intimate understanding of the issues involved in conserving the park.

In 2005, Harerimana met Edwin Sabuhoro, who has held the position of Tourism Warden of Volcanoes National Park and also went on to found Ibyiwacu Cultural Village, an educational village which is run by an ex-poachers’ association, as well as the tour company Rwanda Eco-tours. Sabuhoro first got Harerimana involved in local conservation efforts.

Once he became involved in conservation, Harerimana says, “It was really easy to understand why we should conserve these mountain gorillas…. It was easier for me to understand than for my dad, who does not write or read, or my uncles and my neighbors, and it took time to convince them of why they had to get out of the park.”

Despite his family’s history, Harerimana believed that eco-tourism offered a viable alternative livelihood for people who had traditionally depended on the forest. In 2011, after travelling to Japan for further training in community tourism, Harerimana returned to Kinigi, where he founded the Muhisimbi Volunteer Guides Association. When asked about the name Muhisimbi, he says, “It was for Dian Fossey — as she did!” He’s referring, of course, to the name Karisoke, which was an amalgam of the names of the two mountains between which the original research center was located — Karisimbi and Bisoke. The name Muhisimbi is an amalgam of the names of Mounts Muhabura and Karisimbi.

The Muhisimbi Volunteer Guides Association responded to a particular set of issues Harerimana observed in the villages surrounding the park. There are sites, like Ibyiwacu Cultural Village where Harerimana worked for a time, which have programs designed for tourists to learn about local customs and traditions. But tourists often wandered into other villages in hopes of meeting local people and seeing contemporary village life. The problem was, Harerimana says, that the tourists and the people in the villages they visited were unable to communicate well, and there was not a good way for them to exchange information with one another. Moreover, there were many educated, English- and French-speaking young people in those villages who were unemployed. Perhaps there was an opportunity here to connect visiting tourists with these young people for mutual benefit.

The Muhisimbi Volunteer Guides Association became involved with the Fossey Fund through the RDB. As part of the Fossey Fund’s partnership with RDB, its Conservation Education Program provides annual training workshops and manuals to RDB guides, on topics including biodiversity training, the history of Dian Fossey, the primates that live in the park, and how to inspire park visitors to take action for conservation, among others. In 2011, when RDB discussed the training program with Joseph Karama, Fossey Fund’s Conservation Education Program manager, they mentioned that they would like Karama to provide a special five-day workshop for the Muhisimbi volunteer guides. The idea was that in the future, the Muhisimbi guides would have the potential to work as interim park guides for RDB or to lead cultural tours on behalf of RDB in communities around the park. In May of 2011, Karama provided the five-day training course to the Muhisimbi guides as well as a couple of newly hired RDB guides.

Harerimana explains why the Muhisimbi Volunteer Guides Association was a good organization for other established NGOs to support: “We say we want to make our conservation sustainable, you know, and that’s why we really want to help those young people who want to conserve the park for today and for the future.”

In June 2011, shortly after the Fossey Fund’s community guide course, Harerimana and three other Muhisimbi guides were asked by RDB to act as interim park guides. Especially during the high season, RDB sometimes needs extra staff to accommodate the number of tourists they receive. RDB knew that the Muhisimbi guides already had the necessary training to take tourists into the park.

Karama says, “I think [Harerimana] was happy…that because of the training we provided him, when the [RDB] interviews came, he was able to pass because he knew what guiding was all about. He had read a lot, and he had the printed resources.”

At the end of the six-month period during which the Muhisimbi guides served as interim park guides, RDB actually hired three of the four Muhisimbi guides to become permanent members of the RDB guide team — including Harerimana, who has been working with RDB now since December of 2011.
Since it was founded in 2011, 13 young people have gotten jobs through their affiliation with Muhisimbi. Harerimana says he would certainly like to work with the Fossey Fund again in the future. Harerimana’s story makes clear how important conservation education, and particularly practical eco-tourism training, like the workshop provided by the Conservation Education Program, can be in supporting local community conservation initiatives.

Harerimana says, “We as young people have to play a big role in our communities to convince our fathers and neighbors that they can protect the park instead of destroying it — and show them exactly what kind of benefits they may get if they are conserving that park.” The Fossey Fund’s Conservation Education Program aims to do just that — to help young people learn more about the unique biodiversity of Volcanoes National Park, and to access different ways of protecting and learning about the park.