As part of a collaboration with Emory University's Global Health Institute, Rollins School for Public Health and Center for Global Safe Water, this summer a student of public health came to Rwanda to study health programs that the Dian Fossey Gorilla Fund International supports in communities that neighbor the gorillas’ habitat in Volcanoes National Park. Suraja Raj, a Master’s candidate at the Rollins School of Public Health in Atlanta, Georgia, focused her research on our Ecosystem Health and Community Development Program. This program aims to reduce disease transmission from people to gorillas while helping to improve people’s lives, an important element of our mission to protect the mountain gorillas.

Among the longest standing initiatives of the Ecosystem Health program is an annual de-worming project in Bisate Village, where many Dian Fossey Gorilla Fund trackers and their families live. The purpose of Raj’s work this summer was to analyze the project’s dataset on human helminth parasites (parasitic worms) and to support and provide recommendations for long-term collaborations between the Dian Fossey Gorilla Fund and the Global Health Institute.

When explaining why the collaboration has such rich potential for success, Raj says, “Both organizations really wanted to take advantage of the long-standing presence that the Dian Fossey Gorilla Fund has had in Bisate Village, as well as the Global Health Institute’s expertise in public health and development work.” 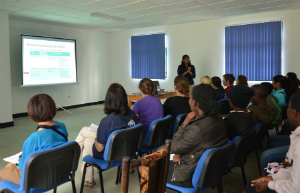 One of the most significant elements of Raj’s work this summer was to clean the ecosystem health program’s data and remove inconsistencies in how data was entered. She was then able to use statistical methods to generate frequencies and create new variables, which made the data more useful and meaningful for thinking about the efficacy of the program’s current initiatives and ways of improving and expanding the program. She also met with representatives from other NGOs, government offices, local leadership, and the Bisate clinic to discuss the programs they run; whether or not these programs have been sustainable; how the current programs are monitored and evaluated; and what programs they hope to see in and around Bisate in the future.

Raj focused her work on the issue of human helminth parasites because data from the Bisate clinic indicates that intestinal parasites are the second leading cause of mortality in the community, after respiratory illnesses. While the Ecosystem Health program already focuses resources on this problem through the annual de-worming exercises, there is also great potential for expansion of its infection prevention programs. Because human helminth parasites are largely transmitted through a fecal-oral cycle, where water or food becomes contaminated by fecal particulates in the soil, Raj’s major recommendation was for the Dian Fossey Gorilla Fund to address the parasite problem through more programs designed to improve water sanitation and hygiene.

While there are a number of water tanks being built in the Bisate area, Raj found that monitoring the water quality in the tanks and helping to educate people about maintaining clean water once they have acquired it from a tank are both areas that should be addressed. She saw opportunities for hygiene education to be increasingly incorporated into the Dian Fossey Gorilla Fund’s conservation education program and for encouraging participants in our Karisoke Research Center’s citizen science programs in secondary schools and interns from the National University of Rwanda to study water sanitation and hygiene. Raj also proposed that data from the anti-poaching teams, who record the location of snares they find in the forest, could help determine which other communities might benefit from the Dian Fossey Gorilla Fund’s activities. If data from anti-poaching teams show that specific communities seem to be using Volcanoes National Park for illegal activities more often than others, we could focus increased outreach in those areas. 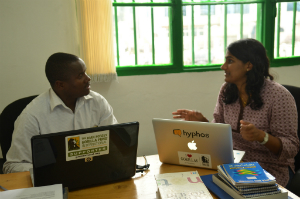 Ecosystem Health and Community Development Program Manager Ildephonse Munyarugerero worked closely with Raj on her project, providing access to data and guidance based on his experience working in Bisate and with the Dian Fossey Gorilla Fund, and accompanying her to meetings with local organizations and leaders.