After being separated into two groups for more than a year, Beetsme’s group (one of the main mountain gorilla groups monitored by the Karisoke Research Center) is back together again. And it all has to do with the power relationship between father and son silverbacks. Mountain gorilla groups are generally led by one dominant silverback, although there may be other males in the group, in addition to adult females and youngsters of both sexes. 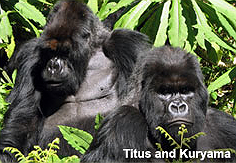 The split within Beetsme’s group that began over a year ago (the group is named after its former leader, the late silverback Beetsme) was a result of the gradual shift in dominance between the two leading silverbacks, father Titus and son Kuryama. Titus has been the dominant silverback of the group for more than 15 years, but starting in 2004, Kuryama started to show interest in becoming his successor and gradually he began to challenge his father.

Over the next three years, Kuryama gained the alliance and support of some members of the group, especially sexually mature females who found the strong, young male more enticing than the now elderly Titus. In 2007, the coexistence of the two silverbacks become so tense that the group split and half stayed with Titus, who didn’t want to give up his “alpha male” position, while half went off with Kuryama.

The group lead by Kuryama had a very successful year, with four newborns and two new females joining from nearby groups. Titus, on the other hand, lost two females who transferred into other groups, even though his group is very compact and the individuals exhibit very strong social bonds. For example, during resting time Titus is normally surrounded by all members of his group, sometimes with two or three gorillas grooming him at the same time.

Titus has had help from young silverback Tuyizere, who is too young and inexperienced to take leadership but still strong enough to help protect the group during interactions. Also remaining with Titus is Tuck, the dominant female of the group, along with her 2- year-old infant. Tuck has developed a very strong relationship with Titus and she seems to have decided to stay with him when the group split. However, Tuck sometimes moved to Kuryama’s side for a few days but then always went back to Titus. 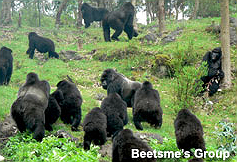 The status of dominant silverback group leader requires considerable strength, necessary in order to ensure the group’s protection, especially during inter-group interactions. Titus at 33, is pretty old, considering the normal gorilla life expectancy of 35. Still, even though his group members have been faithful to him he seems to have recently developed the awareness that he can no longer ensure the total protection of the group. Once again, Titus took the right decision, rejoined his son Kuryama and accepted his offspring’s new role as dominant male.

The groups came back together at the beginning of May 2008, after one year of separation. The reunion was peaceful and soon all members mixed, with the young from both groups playing together while the adults tried to establish the new hierarchical order.
Kuryama, as leader of the group, decides upon the group’s movements and takes his position in front of them all while traveling. Titus is still surrounded by all his affectionate supporters, and he peacefully stays behind his son, finally accepting his lesser role.

All gorillas in the re-formed Beetsme group seem happy to be together again. They are aware of the leadership of Kuryama but seem to still respect Titus and are very close to him. Kuryama is demonstrating the skills of a valid successor, and now, with the responsibility of the whole group, he can take advantage of the support of the four other silverbacks in the group, including the long experience of his father, Titus.