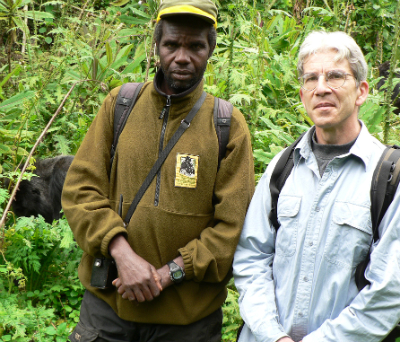 The Karisoke™ Research Center recently honored the retirement of our longest-serving staff member. After nearly four decades on the job, Faustin Barabwiriza donned the tracker’s uniform one last time, before leaving the forest and the gorillas he loved and faithfully served. He is celebrated as a fearless man who knew the gorillas better than anyone.

“It all changed from that moment on,” he says. “She realized I was good at tracking, so she promoted me.” The job was not at all easy, and neither was life in the damp, cold Hagenia forest, but the thrills were immense, Barabwiriza recalls.

“It was a terrible moment in my life, but I knew I couldn’t give up. I had lost my teacher, but I had to go on.” As soon as he was cleared he returned to his job. He was by now a very experienced tracker, spending more and more time monitoring and protecting the gorillas in Beetsme’s Group.

He developed a special bond with Titus, whom he had witnessed growing from a tender age into the legendary silverback the whole world eventually came to know. “Titus was unique. He was an amazing leader, who managed the other gorillas in the group not by force, but with a remarkable calmness,” says Barabwiriza, staring blankly very far away. He then pauses for a long while, sifting through the countless memories of his dear friend, who passed away in 2009. 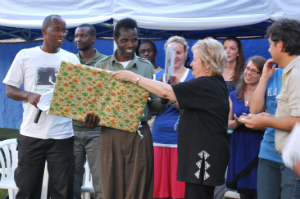 From the early 2000s on, as Karisoke drastically increased its research scope and more scientists from across the globe came to study the mountain gorillas, the tracker job changed. “The operations expanded, and everything became much better organized. We began to write very detailed reports, which required bigger concentration in the field,” he says.

They were also met with another challenge. The three traditional groups, named after Beetsme, Shinda and Pablo, tripled in number. New trackers were hired, and Barabwiriza used his extensive experience to train many of them in the field. Most of all he wanted to see dedication, punctuality and fearlessness in the young trackers as they came on board. He now feels that he will leave the gorillas in good hands.

Karisoke Director Katie Fawcett reflects on Barabwiriza’s unparalleled contribution and legacy: “Barabwiriza is gifted with a rare talent to understand the very essence of another species’ life. Although he himself did not attend school, he has introduced generations of students, scientists and field staff to the world of gorillas and taught us more than you can ever learn in books. His hard work, passion and untiring dedication to the gorilla protection has led to success. It seems fitting that in the year he retires the Virunga gorilla population is the largest ever recorded, with 480 gorillas. He has given us a hard act to follow.”

For generations to come, Barabwiriza’s name will never cease to reverberate in the Virunga mountains, as trackers have already named a forest path in his honor.