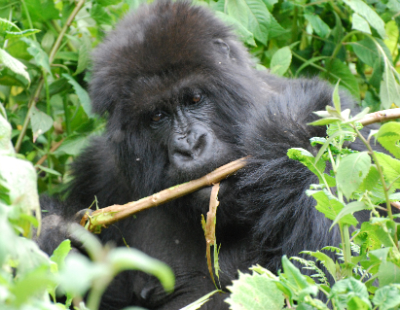 The elderly female Kubyina has been missing from Ugenda’s group since September 6. Female mountain gorillas rarely travel alone, as it can be dangerous for them, and Kubyina is one of the oldest gorillas in the research groups. She is estimated to be 30 but may be much older, judging from her appearance in comparison to other females.

Kubyina has had some hard times recently. On August 15 her 3-year-old infant Shyirambere died of unknown causes during a cold spell. Twice during the last half of August she seemed weak and was found lagging behind her group, although on both occasions she soon recovered and returned to the group the next day.

The anti-poaching team began searching for her on September 6 when she was not found in her group. Two days later, trackers from the park authority (Rwanda Development Board) joined the Karisoke trackers to help with the search. They failed to find her, but they did find her nest and a fresh trail headed back toward Ugenda’s group. However, they lost the trail at about 300 meters from the group. They did find several feeding remains on her trail, a good sign as it showed that she was still feeding well.

The following day, a large team of trackers including some anti-poaching patrol members again looked for Kubyina in vain. They hoped that no more bad news would follow the sad death of another female, Ntobo, from illness that day.

“We now have serious concerns for Kubyina’s health, as it is not normal for a female, and surely not for old Kubyina, to be out of group for so long,” says Veronica Vecellio, Karisoke’s Gorilla Program manager.“In addition, the group has been ranging in the same area for a long time, as happened in the past with gorillas that died, such as Titus, Shinda and Tuck. On the other hand, the recent death of her infant may be a good reason for her to have left the group. Let's hope to find her safe alone or – why not? – with a lone silverback. Our fingers are crossed.”