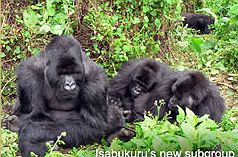 Transfers of female mountain gorillas among groups are becoming a routine event, at least among the groups monitored by the Karisoke Research Center’s field team. Since the beginning of the 2007, 24 females have switched groups, following several different patterns. Sometimes they travel alone until joining a new group, and sometimes they take advantage of an inter-group interaction. The latter is the case with the transfer of five females observed on June 26, 2007.

The event involved the two biggest groups of mountain gorillas living in the Virunga massif. They encountered each other in a spectacular interaction, with almost 90 gorillas in the same spot. The two groups were Pablo’s group, now composed of 48 gorillas and Susa’s group, a group that is visited by tourists and composed of 39 individuals. The event lasted for more than an hour, and all the males – the dominant and subordinates of both groups – were involved in the conflict, in various ways. 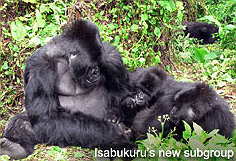 The new group members created a general excitement among all the young males and some of the females in Pablo’s group. However, the two old silverbacks (Pablo, and the dominant Cantsbee) were not interested at all in the upcoming sexual competition and they continued their normal leadership roles.

The day after the interaction, Isabukuru, a 14-year-old silverback, started moving away from the group, followed by Muganga, Icyizere, Muntu and her infant. Isaro, another young female, and blackback Kubaha also tagged along. Although there was a bit of settling in to do, the new group seemed to work out, although Muntu’s infant was soon missing, probably a result of infanticide by Isabukuru (a common occurrence when a female changes groups, carried out by the silverback so that the female becomes quickly available to him for reproduction).

In the following days, the group continued to be calm but on June 29 they crossed the trail of Pablo’s group. At that time the females started to move in the direction that Pablo’s group had gone, but Isabukuru stopped them, putting himself in front of them in strut-stance posture and displaying. This worked and the females resumed following him. Iciyzere is often behind the group alone and follows from a distance. Kubaha and Muganga are often together. The subgroup ranged in the area of Bahimba at the feet of the Karisimbi volcano, not too distant from Pablo’s group. 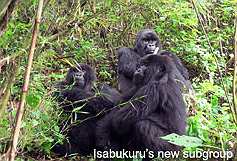 Ishema is the only new female who decided to remain in the main Pablo group after the June 26th interaction. She is receiving the standard welcome following a transfer and is principally the target of the young males of the group, silverback Rukundo and blackback Musilikale. The day after the transfer, Musilikale was following her around making lots of displays, sometimes aggressively. Ishema didn’t seem particularly interested in him and tried to avoid his tough approaches many times. Much more successful is Rukundo, who spends much more time with Ishema and in effect chases Musilikale from the scene. Blackbacks Twihangane and Gushimira also approached the new female, but don’t spend too much time in her company, due to their lower ranks in the group. The mature silverbacks Cantsbee and Pablo totally ignored the new presence in their group, tolerating all interaction and activities happening around her.

The Karisoke team is still amazed to observe all the changes going on among the gorilla groups. Since they are all ranging in the same areas, we are seeing more and more interactions and transfers, and never know what will happen next!