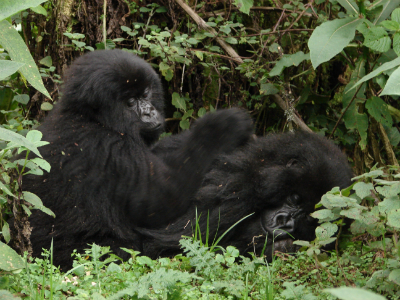 Very sad news from the field today. Early this morning a team of trackers, researchers and veterinarians hiked out to the forested area between the Karisimbi and Visoke volcanoes to find Bwenge’s group and assess ailing female Ntobo’s health condition. The Bwenge group trackers had previously observed that the 20-year-old female appeared very weak and lethargic, breathing with difficulty and panting a great deal.

Unfortunately, when they reached the group around 9 am, it became immediately apparent that Ntobo was not faring well – her condition had deteriorated from the previous day. She was trailing a few meters behind her group and was extremely weak and lethargic. Her almost 4-year-old infant Ntaribi lingered near, unsure of what was happening. He was whimpering and protectively wrapping his arms around his mother, attempting to suckle for comfort.

Although she attempted to take a few steps, Ntobo immediately fell onto the ground, where she remained lying face down. The veterinarians took the opportunity to dart her with a sedative. Before she fell asleep, Bwenge approached her and displayed with loud hooting and chest beating in an attempt to convince her to follow him and the rest of the group. His behavior was probably related to the close proximity of Kuryama’s group. Bwenge then left Ntobo and Ntaribi behind as he moved his group farther away.

Once Ntobo was completely asleep, the trackers gently pushed infant Ntaribi away from his mother and he immediately joined the rest of his group, about 100 meters away. 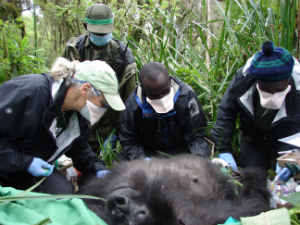 All examinations went well and she was responding well. However, when the veterinarians tried to reverse the effects of the sedatives, Ntobo initially showed signs of breathing difficulty. They tried every possible means to stabilize her, but Ntobo slowly passed away.

Her body was recovered and transported down the mountain to the MGVP office for a necropsy, which we hope will reveal the reason for Ntobo’s sudden and sad death. The preliminary assessment suggests that she could have suffered a possible miscarriage, but this will only be confirmed once we receive the results of the necropsy.

Despite today’s sad outcome, the team had collaborated perfectly. All of the trackers and veterinarians made an outstanding effort to try to save Ntobo’s life.

The necropsy results are clear. Dr. Ramer reported that Ntobo had severe pneumonia with abcesses in her lung, and had also had a miscarriage, probably because of the pneumonia. “It all went so fast!” says Gorilla Program Manager Veronica Vecellio. “None of us had realized any sign of sickness before Wednesday. As pneumonia may be contagious, we are going to give special attention to all gorillas from Bwenge's group during the next days, particularly little Ntaribi.”

Field staff reported that one day after Ntobo’s death, Ntaribi is coping well with the sudden loss. According to the trackers, he spent the night together with Bwenge in one nest. During the day, Ntaribi also rested close to his father, surrounded by other group members such as Faida and his little playmate Akaramata. When the group started feeding, Ntaribi preferred staying with Akaramata and other playmates, who were even able to engage him in short playing sessions. Bwenge gave hooting vocals twice, which may indicate that he is still looking for Ntobo.